This document was reviewed and approved by the Board of Governors of the Society of American Gastrointestinal and Endoscopic Surgeons (SAGES) in Mar 2017. 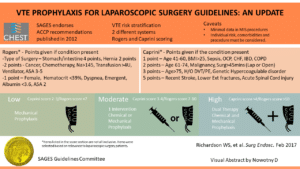 The 2012 ACCP guidelines are easy to use, are more comprehensive, and are based on stronger evidence than the 2007 SAGES VTE prevention guidelines.  However, they are not specifically directed at laparoscopic surgery patients.  There are differences in VTE risk between open procedures compared with those performed laparoscopically.  In a study comparing the incidence of VTE following laparoscopic versus open surgery in 138,595 patients, there was a statistically significant reduction in risk of VTE after laparoscopic surgery compared to open surgery (5).  The specific type of procedure is not considered in the calculation of VTE risk.

A meta-analysis on laparoscopic cholecystectomy indicated that routine use of VTE chemoprophylaxis was likely to be unnecessary and suggested considering its use only in higher risk patients based on risk stratification (6).  The overall incidence of clinically evident deep venous thrombosis (DVT) was 1.6% without prophylaxis.  Two randomized studies included in that analysis reported on the risk of major bleeding; one reported no major bleeding, while the other study reported major bleeding in 2% in the heparin group versus 3% in the group without chemoprophylaxis. Using the ACCP guidelines, many patients from this study may have been at low to moderate risk using either of the scoring systems and would be given no prophylaxis for a Caprini score of 0, IPC for a score of 1-2, or UH, LMWH, or IPC for a score of 3-4 (moderate risk).  Based on the meta-analysis, there was no significant benefit of chemoprophylaxis in cholecystectomy patients.

Among patients undergoing colon surgery with or without cancer, there is a reduction in VTE using a combination of IPC and chemoprophylaxis.   Data from the Michigan Collaborative of 3,464 patients on dual therapy showed a 1.7% risk of VTE with laparoscopic left vs. 0.5% for right colectomy (7). In this study, older patients, those with higher body mass index (BMI), and patients with angina and postoperative infection had an increased risk of VTE.  With either IPC or chemoprophylaxis alone (single therapy), the risk of VTE was almost twice the risk of using both therapies.  They found no difference in VTE risk with UH vs. LMWH.  An increased risk of bleeding was not observed. In general, these patients fell in the moderate to high risk Caprini group and dual therapy would have been appropriate.   The optimal duration of thromboprophylaxis was studied in a randomized trial of 225 patients undergoing laparoscopic colectomy for cancer.  The incidence of VTE with one week of heparin prophylaxis was 9.7 vs. 0% of patients who received 4 weeks.  The authors concluded that prolonged use of chemoprophylaxis is safe and reduces the risk of VTE compared to using 1 week of heparin (8) .  These recommendations are aligned with the ACCP guidelines, but the small number of patients in this single study limits our ability to support extended chemoprophylaxis strongly.

VTE is a challenging problem after bariatric surgery but there are few randomized controlled trials studying thromboprophylaxis in this population. Most bariatric surgery patients carry multiple risk factors for VTE and therefore are at least at moderate risk for VTE postoperatively.  Despite the elevated VTE risk, the incidence of postoperative VTE is low. A meta-analysis of 19 studies with 3991 patients demonstrated a weighted mean incidence of PE of 0.5% with fixed-dose chemoprophylaxis and an incidence of symptomatic VTE of 0.6% with weight-based chemoprophylaxis (9).  The risk of VTE is lower for laparoscopic compared with open bariatric surgery patients (0.34% versus 1.54%) (10).  Based on the ACCP guidelines, LMWH, unfractionated heparin, or mechanical prophylaxis with IPC are recommended (2).  There is no consensus on the standard of care for chemoprophylactic agent, dosing, timing, or duration.  Dosing of pharmacologic prophylaxis is challenging in postsurgical bariatric surgery patients because dosing by body weight may lead to excessive anticoagulation and bleeding.  Some studies utilize anti-factor Xa levels to determine adequacy of anticoagulation, but therapeutic levels do not necessarily predict a reduction in VTE.  The ACCP guidelines recommend consulting with a pharmacist to determine dosing in obese patients (2).

Prophylactic removable inferior vena cava (IVC) filter use had previously been recommended in high risk bariatric patients such as those with BMI >60, severe pulmonary hypertension, or previous VTE (11).  More recent data argues against the use of prophylactic IVC filter placement.  In 322 of 97,218 patients who received IVC filters and had either gastric bypass or gastric band, there was an increased risk of DVT, length of hospital stay and mortality compared to the non-IVC group (12).  In this study, there was no benefit for prophylactic insertion of IVC filters.  A meta-analysis of prophylactic IVC filters in bariatric surgery demonstrated an increase in the risk of DVT by 3-fold while the increase in mortality was not statistically significant (13).  Long-term complications associated with IVC filters are concerning (14) and most filters are never retrieved (15).  There is insufficient data from randomized studies to support the use of prophylactic IVC filters.

All general surgical patients should be assessed for risk of VTE because of the potential for fatal consequences.  Our endorsement of the ACCP guidelines comes with several caveats.  First, there are very few prospective randomized trials available in the literature addressing VTE prophylaxis in minimally invasive surgery.  The specific type of laparoscopic procedure is not represented in the two VTE risk stratification systems used in the ACCP guidelines.  Bleeding resulting from anticoagulation should be considered when administering and dosing chemoprophylaxis in the postoperative patient.  The optimal agent, dosing, duration, and timing of pharmacologic prophylaxis have not yet been determined.  An individual patient’s specific risk factors for VTE, other medical comorbidities, and the type of procedure must be taken into consideration in cases in which the guidelines do not provide specific recommendations.

© 2022 Society of American Gastrointestinal and Endoscopic Surgeons. All Rights Reserved. Please do not post this document on your web site.

This document was reviewed and approved by the Board of Governors of the Society of American Gastrointestinal and Endoscopic Surgeons (SAGES) in Mar 2017.

Guidelines for clinical practice are intended to indicate preferable approaches to medical problems as established by experts in the field. These recommendations will be based on existing data or a consensus of expert opinion when little or no data are available. Guidelines are applicable to all physicians who address the clinical problem(s) without regard to specialty training or interests, and are intended to indicate the preferable, but not necessarily the only acceptable approaches due to the complexity of the healthcare environment. Guidelines are intended to be flexible. Given the wide range of specifics in any health care problem, the surgeon must always choose the course best suited to the individual patient and the variables in existence at the moment of decision.

Guidelines are developed under the auspices of the Society of American Gastrointestinal and Endoscopic Surgeons and its various committees, and approved by the Board of Governors. Each clinical practice guideline has been systematically researched, reviewed and revised by the guidelines committee, and reviewed by an appropriate multidisciplinary team. The recommendations are therefore considered valid at the time of its production based on the data available. Each guideline is scheduled for periodic review to allow incorporation of pertinent new developments in medical research knowledge, and practice.