Wide-area trans-epithelial sampling of the esophagus with computer-assisted three-dimensional analysis (WATS3D , CDx Diagnostics, Suffern, NY) is an adjunctive technique to random biopsies for early detection of Barrett’s esophagus.  The system is comprised of brush sampling that obtains trans-epithelial specimens covering a larger area of the BE segment compared to traditional forceps biopsy.(1) The system allows for evaluation of deeper glandular epithelium commonly found in Barrett’s esophagus through the full-thickness epithelial sample and 3-D computer analysis.  The computer analysis uses a neural network, high-speed scanning system that identifies abnormal cells based on cellular morphology and molecular diagnostics.(2)

Forceps biopsy using the Seattle protocol has the potential to leave behind un-sampled tissue containing Barrett’s esophagus or other pathology. The Seattle protocol examines 4% of the esophageal area of concern, potentially yielding a low sensitivity.(3) Traditional histological techniques for sample evaluation of biopsy specimens may also have limitations.  The standard technique is to mount a thin slice of the fixed biopsy specimen onto a glass slide, which is then examined by the pathologist with microscopy. WATS3D obtains trans-epithelial specimens, circumferentially from the lower esophagus via a stiff brush placed through working channel of the endoscope.(Figure 1). 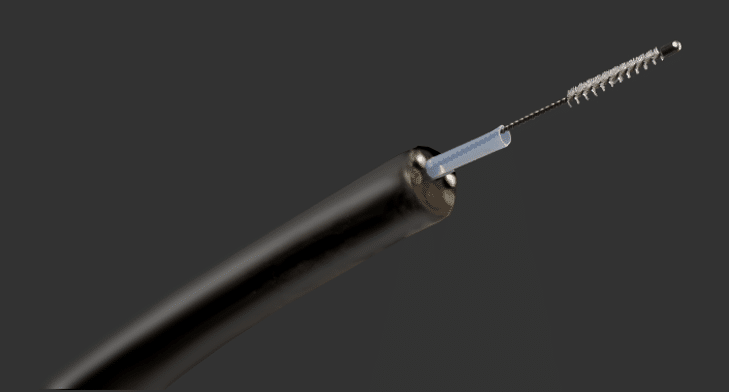 The brush is passed across the mucosa and rotated circumferentially until erythematous tissue or pinpoint bleeding at the biopsy site is noted.(4) The brush obtains samples down to the lamina propria, which are plated and stained, as 100 micron-thic tissue containing tissue fragments, individual cells, and cell clusters. The specimens are stained and examined at the CDx Diagnostics laboratory. All of the approximately 100,000 cells obtained through brushings are analyzed with a proprietary imaging and computer network that allows a three-dimensional view, resulting in a “3-D Micro-Biopsy.”(4) The approximate two hundred cells with suspicious characteristics such as goblet cells or dysplasia are then flagged for the pathologist as a starting point for analysis. Eighty of the most suspicious images are sent to the pathologist, who renders the final result following both the 3D, computer-assisted high-resolution images and manual microscopic examination of the slide. 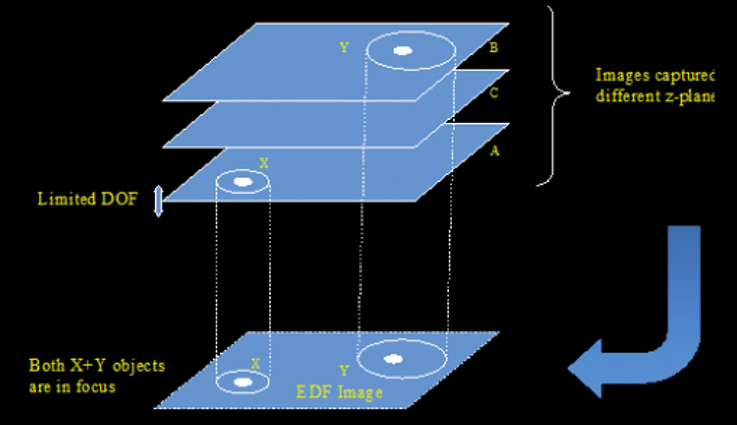 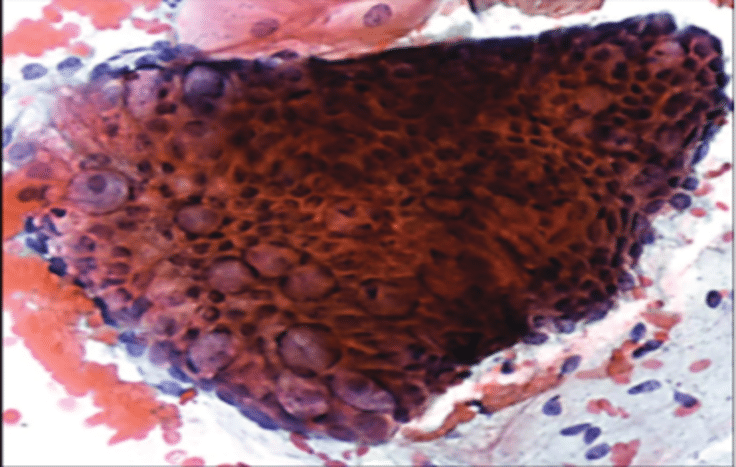 Clinical studies involving wide-area trans-epithelial sampling (WATS) of the esophagus with computer-assisted 3D analysis and were identified via a search of the PubMed/Medline databases (www.ncbi.nlm.nih.gov/pubmed) conducted in March of 2019. Keywords utilized in the search include: wide-area transepithelial sampling, three-dimensional (3D) computer-assisted analysis, WATS-3D, Barrett’s esophagus and WATS-3D, Barrett’s esophagus and wide-area transepithelial sampling with three-dimensional computer-assisted analysis, Barrett’s esophagus and emerging technology. Bibliographies of key references were searched for relevant studies not covered by the PubMed search. Case reports and small case series were excluded. The manufacturer’s website was also used to identify key references and instructions for use. The U.S. FDA Manufacturer And User facility and Device Experience (MAUDE) database was searched for reports regarding the device malfunction or injuries

Current studies compare WATS3D to the Seattle protocol, the current standard of care for BE screening. The American College of Gastroenterologists (ACG) guidelines state current biopsy sampling protocol accuracy to be in the range of 35% to 68%, suggesting the need for alternative or adjunctive diagnostic tools to improve accuracy.(11) Studies have demonstrated WATS3D  increases the detection of Barrett’s esophagus or dysplasia by 39-425% compared to standard forcep biopsy.(12)

Currently, WATS3D alone is not recommended as a substitute for the Seattle protocol, but as an adjunctive diagnostic tool.  Indications for WATS3D technology include patients undergoing endoscopic evaluation for upper gastrointestinal conditions including reflux disease, peptic ulcer disease, and screening or surveillance for Barrett’s esophagus. Contraindications mirror the contraindications for upper endoscopy, including known perforated viscus. Final conclusions regarding WATS-3D cannot be made until studies demonstrate its ability to solely increase the diagnosis of Barrett’s esophagus, esophageal dysplasia, and esophageal neoplasia beyond current protocols.

iii.  Smith et al. evaluated patients undergoing screening for BE by 58 endoscopists at 21 sites from June 2013 to July 2015.(14) The endoscopists were instructed to use both WATS3D and FB to sample suspected BE only in patients with salmon-colored mucosa in the esophagus.  Forceps biopsy were obtained using a 4-quadrant biopsy protocol at every 1cm and 2 cm. Any visually abnormal tissue (raised lesions, ulcerations) were biopsied with FB as well.  WATS3D was used to evaluate additional areas of the BE segment that would not have been sampled by FB.

Currently, WATS3D is not recommended as a stand-alone substitute for cold forcep biopsies.  Forcep biopsy still offers the ability to sample specific areas of concern within the esophagus.  Because the WATS3D system samples larger sections of the esophagus (compared to specific locations offered by forcep biopsy), gastroenterologists or surgeons may find it difficult to identify where a biopsy specimen may have come from in relation to the gastroesophageal junction.(1)  Most studies have utilized the proximal gastric folds as the landmark for the gastroesophageal junction, however, this structure is dynamic, changing position with respiration, gut motor activity, and distention of the stomach and esophagus.  Some patients diagnosed with BE may have intestinal metaplasia of the cardia.  These concerns are inherent in the learning curve of a new device.  Further research into the use of the WATS3D system as an independent screening or diagnostic modality may be warranted.

With regards to safety:

With regards to efficacy:

With regards to value: