The PAS-Port proximal anastomosis system is an automated single-use device for connecting venous grafts to the aorta for procedures such as coronary artery bypass graft surgery. After the vein is harvested and loaded through the stainless-steel deployment clasp, the device securely attaches and seals the loaded graft to the aorta at the turn of a knob. Grafts are inserted perpendicular to the aorta to allow for variable angles and anastomotic configurations. The grafts are rapidly implanted within seconds and do not leave any foreign substances in the venous lumen. The PAS-Port proximal anastomosis system saves far more operating time compared to labor intensive and risky hand-sewn grafting and removes the need for risky aortic clamping.

A 220-patient prospective, randomized trial was carried out in 2006 at 12 sites in the United States and Europe. The trial design and endpoints reflected guidance received following 2005 FDA panel meeting regarding the system. The primary endpoint of the trial was non-inferiority of the patency of the PAS-Port graft compared to the hand-sewn graft nine months following the CABG procedure. The PAS-Port system met the primary efficacy endpoint of non-inferiority in patency at nine-month follow up compared to hand-sewn anastomoses. 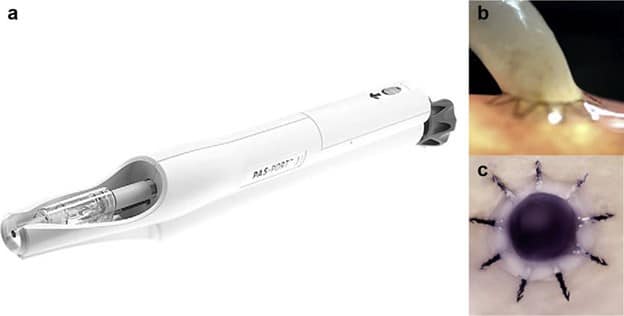 B – Schematic drawing of anastomosis created by PAS-Port device

C – Luminal view of the anastomosis