INTRODUCTION: We present a novel technology to visualize the common bile duct (CBD) and cystic duct (CD) in patients. Injuries to the CBD are rare but serious complications with need for re-intervention, risk of permanent disability and prolonged hospital stay, and occur most often in presence of unclear or anatomic variations. An intra-operative cholangiogram requires additional operating time, a X-ray machine with trained personnel, and the bile ducts need to be perforated or cannulated to administer the contrast fluid to the biliary structures. Indocyanine Green (ICG) is a well used green contrast fluid, and with the recent introduction of a near-infrared (NIR) camera (Olympus, Hamburg Germany) ICG can also be used for its fluorescent qualities. After intravenous administration ICG is exclusively cleared by the liver and secreted into the bile, where it can be visualised with the near-infrared camera.
Aim: A new method of early visualisation of the CBD and CD during laparoscopic cholecystectomy and prevention of injuries to biliary structures.

METHODS AND PROCEDURES: Patients eligible for elective laparoscopic cholecystectomy diagnosed with uncomplicated cholecystolithasis are included in the study after oral and written consent. A single intravenous injection of ICG is administered after induction of general anaesthesia, before the start of surgery. During standard laparoscopic cholecystectomy, the specially build NIR camera to is used to visualise the biliary structures. Time of administration of the ICG and assessment of visible structures with both NIR and conventional camera is noted, and procedures are recorded . Post-operatively patients are admitted to the day-care centre and are discharged at the day of surgery conform standard surgical procedures. In total 30 patients are required to obtain 90% power for significant results in regard of early visualisation of the CBD and CD with the NIR camera compared to conventional camera imaging. The power calculation was based on the pilot series of 7 patients.

PRELIMINARY RESULTS: In the first 19 patients, no per- or postoperative complications due to the administration of ICG or the laparoscopic cholecystectomy occurred. ICG in the liver, CBD and CD could be detected as early as 20-30 minutes after intravenous administration. In 18/19 patients, the CBD could be visualised with the NIR before identification of the CBD on conventional camera was possible. Early identification with ICG-NIR of the CD was successful in 6/19 patients. 4 anatomic variations were detected during laparoscopic cholecystectomy, and in 2 patients the use of ICG-NIR could prevent conversion to open surgery when Critical View of Safety could not be confirmed. In fall 2011 the inclusion of patients will be finished and final results with sufficient power will be presented at the SAGES meeting, with video material of this new technique. 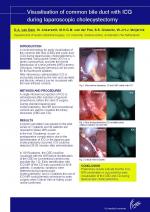