Introduction: In 2013, Centers for Medicare and Medicaid Services (CMS) released data about Diagnosis Related Group (DRG) payments made to over 3000 acute care hospitals in 2011. The data included the average amount billed to CMS by each hospital for top 100 DRGs, as well as average amount paid to the hospital those DRGs in one year. DRG system is a fixed reimbursement to hospitals for Medicare patients based on diagnosis, procedures, age and expected length of stay. Each DRG is further classified into three severity types – With Major Complications or Comorbidities, With Complications or Comorbidities and Without Complications or Comorbidities. The payment rate is determined by multiple factors including local wage index. Laparoscopic cholecystectomy (LapChole) is one of the most common and established surgical procedures. We analyzed LapChole DRG data to assess the variability of Medicare payments across all hospitals in US.

Methods: We identified hospitals which had billed for more than 10 discharges in a year for two commonest LapChole DRGs – Laparoscopic Cholecystectomy without Common Duct Exploration with Complications or Comorbidities (DRG 418) and without Complications or Comorbidities (DRG 419). There were a total of 18,227 discharges in DRG 418 and 16,157 in DRG 419. The dollar amounts were rounded.

Conclusion: The analysis enables surgery programs to compare and benchmark against their peers regionally or nationally. The information is also beneficial to patients who have to pay out of pocket for this surgery. DRG system does not reward efficiencies nor incorporates surgical outcomes, so with emerging healthcare environment focusing on cost control and improving efficiencies, newer payment methods may need to be instituted. 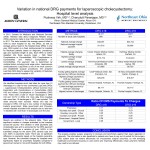