Results:
Of 75 patients evaluated: 63 were Grade1, 8 were Grade2, 4 were Grade3. The air leak test was negative for all patients except one. The total anastomotic leak rate for this series was 15%. Seven patients with Grade1 anastomoses developed AL (11%). Three of these represented symptomatic AL requiring minor drainage procedures. The remaining three patients had an incidental finding of AL for which no intervention was necessary. Among Grade2 anastomoses, 4 of 8 patients experienced an AL (50%). All Grade3 anastomoses were reconstructed immediately at time of the index surgery; none subsequently leaked. 13 mid rectal anastomoses were not diverted based upon the healthy endoscopic appearance of the anastomosis. Only 1 of these patients experienced a minor symptomatic leak.

Conclusions:
This study demonstrates that endoscopic evaluation of the perianastomotic mucosa is useful in stratifying patients at high risk of anastomotic leak. 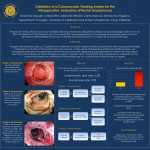