Objective: Severe marginal ulceration is traditionally treated surgically.  Here we describe the use of a novel endoscopic suturing device to oversew a large stomal ulcer and avert a complicated surgical revision.
Technology Description: Ulcer oversewing was performed using a novel endoscopic suturing system (Figure 1).  The system attaches to a double-channel endoscope and utilizes a curved needle that allows the placement of a variety of stitch patterns, including running or interrupted, with a single insertion of the endoscope.
Methods: This is the case of a 71-year-old male with recurrent GI bleeding, starting one week following Roux-en-Y gastric bypass (RYGB).  A large marginal ulceration, roughly 1/3 the stomal circumference, was found on upper endoscopy (Figure 2A).  He was subsequently admitted five times for GI bleeding and required over 20 blood transfusions.  He again presented with melena and was transferred to our center for further management.  At presentation, he appeared nontoxic with stable vital signs. Abdominal exam was benign.  He was a poor surgical candidate due to a complicated medical history that included coronary artery disease with multiple stents, peripheral vascular disease with aorto-bifemoral bypass, DM, COPD, and OSA.  A decision was made to treat his ulcer using a novel endoscopic suturing system.  Video records were maintained.
Results: Two interrupted stitches were successfully placed into the tissue surrounding the ulcer bed using 2-0 polypropylene monofilament sutures.  Complete ulcer closure was achieved (Figure 2B).  Tisseel fibrin glue was applied to the sutured area.  The procedure was performed under general anesthesia and took less than 25 minutes.  It was well tolerated and there were no complications.  At 6 weeks post procedure, the patient reported complete resolution of his symptoms and repeat upper endoscopy demonstrated complete ulcer resolution (Figure 2C).
Conclusion: This case demonstrates the technical feasibility of stomal ulceration oversewing using a novel endoscopic suturing device.  This technique may provide an effective, minimally-invasive treatment alternative to operative intervention.  Further studies with this system are currently underway. 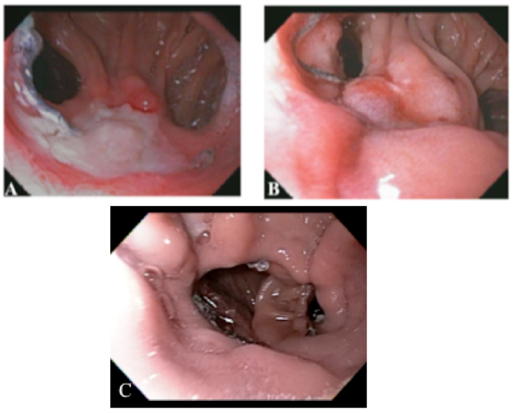