Introduction: Laparoscopic urologic surgery is generally performed using three to six ports by transperitoneal or retroperitoneal access. Recent developments regarding laparoscopic surgery have been directed toward reducing the size or number of ports to achieve the goal of minimal invasive surgery, by mini-laparoscopy, natural orifices access and transumbilical approach. In this paper we evaluated the safety and feasibility of transumbilical laparoscopic surgery using conventional laparoscopic instruments and ports.
Methods and Procedures: The Veress needle was placed through the umbilicus which allowed the carbon dioxide inflow. A 10mm trocar was placed in the periumbilical site for the 30-degree scope followed by the placement of two additional 5mm periumbilical trocars. The entire procedure was performed using conventional laparoscopic instruments. In the end of the surgery, trocars were removed and all three periumbilical skin incisions were united for the specimen retrieval.
Results: Six procedures were performed following this technique: three nephrectomies, one adrenalectomy, one ureterolithotomy and one retroperitoneal mass resection. The mean operative time and blood loss were 70.5 minutes and 108.3cc, respectively. No intraoperative complications occurred and no patients needed blood transfusion. Analgesia was performed using dypirone (1g IV q6h) and ketoprofen (100mg IV q12h). Time to first oral intake was 8 hours. Mean hospital stay was 28 hours.
Conclusions: Laparoscopic transumbilical surgery seems to be feasible and safe even using conventional laparoscopic instruments, and can be considered a potential alternative for traditional laparoscopic surgery. 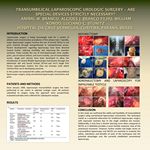