INTRODUCTION
We performed inguinal hernia repairs to 389 cases between five and half years from when our hospital was established. And then posterior approach of inguinal hernia repair was performed to 305 cases, and it included 153 cases of laparoscopic operations. We performed TEP procedure to 126 cases. At the time of introducing, we used preperitoneal dissection balloon (PDB) for posterior approach, and it was used for totally 66 cases. However we stopped to use PDB from 67th case due to three reasons. One of terrible experience was that patient’s urinary bladder was ruptured by PDB. The 2nd reason is that we experienced tremendous adhesions of preperitoneal space of contralateral inguinal recurrence hernia after previous operation using PDB for an unilateral case. Using PDB for bilateral inguinal hernia repair was acceptable selection, but it might give risks for unilateral cases to use it. The 3rd problems were due to size of incisional trocar wounds. It gave cosmetic problems and wound pain to patients. Large sized mesh was usually selected to prevent for recurrent hernia, but it could not insert into preperitoneal space through the narrow trocar. We found a way out of these problems, and we would like to describe a new procedure for it.

RESULTS
TEP procedure was performed without any problem, and its handling and its safety were no less than standard TEP procedure. In the first trocar insertion, the optical method was not only simple and easy technique but also gave clear and safe laparoscopic view. In unilateral case, dissected preperitoneal space was kept at unilateral area, and it was never dissected toward contralateral area. Moreover least bleeding and a clear dry view were kept throughout the procedure, and there were no complications. Using large sized mesh, inguinal area was covered enough, and it prevented ipsilateral recurrence hernia effectively. Using thinner trocar, wound pain was decreased, and its wound was more cosmetic.

EXPECTATIONS
This method will be the best procedure for TEP, as a needle scopic surgery in the near future. 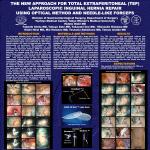