Introduction:
Component separation for rectus abdominis myofascial advancement (CST) during ventral incisional hernia repair (VIHR) is a technique associated with higher complexity of operation and postoperative complications than traditional mesh repairs. Despite a lack of new evidence demonstrating an improvement in long-term efficacy, there remains great interest in CST and published reports of open and endoscopic CST are increasing in frequency. We hypothesized that the utilization of CST in the United States is likewise increasing, and we sought to determine whether this increase was associated with any patient, payor, or community demographics.

Methods:
The Nationwide Inpatient Sample (NIS) database from 2003-2008 was queried to identify patients having undergone VIHR using ICD-9-CM diagnosis codes consistent with ventral abdominal wall hernias (553.20,553.21,553.29) and procedure codes for the abdominal wall hernia repair (53.51,53.59,53.61,53.69). The CST group was defined as cases having the above criteria, combined with ICD-9-CM procedure code for myofascial or myocutaneous advancement flap (86.70,86.72,86.74). The annual incidence of utilization, cost, outcomes, and length of stay (LOS) for VIHR vs CST were compared over the time course of the study. Patient demographics (age, gender, race), payor status (Medicaid, Medicare, private insurance, self pay), and community economic status (average yearly salary by zip code) of the CST group were compared to the VIHR group.

Results:
A highly significant increase in the utilization of CST was observed over the time course of the study, while VIHR volume remained stable (Figure 1). Patients undergoing CST in all years of study were significantly (p<0.0001) more likely to be younger, male, white, and reside in a high-income zip code. CST groups were less likely to have Medicare or Medicaid as a payor. Length of stay and hospital charges were significantly higher in all years of the study for CST cases, but the rates of increase in hospital charges over time were comparable in both groups. The differences observed in patient and payor demographics between the two groups remained stable over time.

Conclusion:
Data derived from the NIS database indicate there has been a significant increase in the utilization of CST with VIHR over the years 2003-2008. Over this time course, the patient, payor, and community demographics have consistently implied a bias toward specific subgroups, but this discrepancy, while still significant, has not become more exaggerated with the increased utilization we observed. 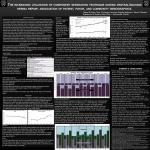