Results: 1069 patients underwent laparoscopic colectomy during the study period. Group 1 contained 324 patients who underwent a laparoscopic colectomy prior to 2004. Group 2 contained 745 patients who underwent a laparoscopic colectomy after 2004. The mean age and preoperative diagnoses were similar between the two groups (62yrs vs 66yrs). Operative time was improved with Group 2. (110 minutes vs 155minutes p<.05). Blood loss was also improved with Group 2 (137ml vs 191ml p<0.5). Complication rates were also improved in Group 2 with p<0.5. Length of stay among the two groups were equivalent (3.9 days vs 4.07days p=0.36) as well as conversion to open procedure and post op complications.

Conclusion: With the increase in laparoscopic training, resident surgeons have become more efficient and skilful in laparoscopic techniques and this study demonstrates their improved operative time, blood loss, and complication rates. 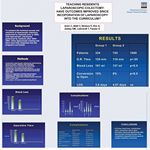