Strangulated Internal Herniation with Bowel Ischemia Following Abdominoplasty: A Case Series and Review of the Literature

Case Series: The patients were 52-year old and 32-year old females who underwent LRYGB three and five years prior to presentation to the emergency department (ED) with severe, acute abdominal pain following uncomplicated outpatient abdominoplasty. Prior to this presentation, both patients experienced excellent weight loss (current BMIs were 24.9 kg/m2 and 26.7kg/m2 respectively) with improvement in medical comorbidities and quality of life. Based on the suspicion of advanced bowel ischemia, in both cases, patients were taken to the operating room for take-down of abdominoplasty and emergent laparotomy.

Intraoperatively, both patients were found to have advanced bowel ischemia due to strangulated internal hernias through the mesenteric (Petersen’s space) defects. These findings required management with reduction of the internal hernias, open abdomen and second look laparotomy in 48 and 24 hours respectively. After determining bowel recovery and viability, and no need for resection, laparostomy wounds (fascia and abdominoplasty) were closed. Following intensive care monitoring, both patients had uneventful further recovery and were discharged home on postoperative days seven and eight.

Conclusion: Strangulated internal herniation with bowel ischemia following abdominoplasty in patients with prior LRYGB can be devastating and life threatening. Both plastic surgeons and bariatric surgeons should be aware of this potential complication in order to detection and treat in a timely fashion. We propose a mechanism by which a preexisting and asymptomatic internal hernia can progress to bowel ischemia and strangulation following fascial placation, which tightens of the intra-abdominal compartment resulting in a “narrow neck” internal defect leading to mesenteric vascular compromise. A low index of suspicion is mandatory in post-abdominoplasty patients presenting with sudden and severe abdominal pain, elevated intra-abdominal pressures may accelerate progression to bowel ischemia. Emergent operative intervention, release of fascial plication and reduction and repair of internal herniation are critical. If massive bowel ischemia is present, open abdomen – laparostomy with a second look laparotomy and bowel reevaluation may be necessary in order to minimize further morbidity of this rare phenomenon. 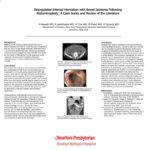