Methods: Three patients received SSET with MRND via a single trans-areola approach. The procedure was performed using one 12mm trocar and one 5mm trocar through contralateral circumareolar incisions. The anterior muscle group and strap muscles were retracted laterally by the needle retractors (1.5mm in diameter, patent pending). The exposure of RLN was initiated at the entry of RLN into the larynx, and the whole portion could be dissected along with the fibers of RLN. On identification of RLN, the upper parathyroid gland could be localized easily out of the entry of RLN into the larynx. After radical thyroidectomy, central compartment neck dissection (CCND) was performed via the same approach. Modified radical neck dissection (levels II, III, IV, VI and VII) was performed by means of one mini-clamp (2.3mm in diameter, patent pending) and three needle extractors. Short-term perioperative clinical parameters and outcome were observed and followed up.

Results: SSET with MRND via a single trans-areola approach was successfully completed without any significant intraoperative complications. The total operation time was was an average 280 ± 30 min. This included the time for working space establishment (10 ± 2 min), ipsilateral thyroidectomy (40 ± 10 min), contralateral thyroidectomy (30 ± 10 min), and ipsilateral CCND (20 ± 5 min) and ipsilateral radical neck dissection (180 ± 30 min). With the help of mini-clamp and three needle extractors, an excellent magnified surgical view could be obtained for optimal visualization of important local anatomical structures. There was no incidence of postoperative hemorrhage or hematoma formation, There was no postoperative vocal cord palsy. One patient presented with transient hypoparathyroidism but had total recovery shortly after oral calcium supply. The drainage catheter was removed 6 ± 2 days after surgery and the patient was discharged from the hospital at an average 8 ± 2 days from admission. The pathology confirmed the diagnosis of papillary carcinoma. The total number of cervical nodes retrieved from CCND and modified radical neck dissection was 8 ± 2 and 25 ± 8, respectively. The number of positive metastatic nodes was 3 ± 1 and 11 ± 2, respectively. No evidence of recurrence was found during the follow-up period.

Discussion and Conclusions: SSET with MRND was technically safe and feasible. Appropriate positioning of the needle extractors is the key to excellent operation. The patented mini-clamp was flexible to enhance handling of the thyroid gland and lymph nodes. The greatest advantage offered by this procedure is of cosmetic value. However, this procedure has a disadvantage of longer operation times. As a pioneering clinical report, in spite of our promising results, future prospective trials should be conducted to evaluate long-term outcomes and to overcome potential limitations. 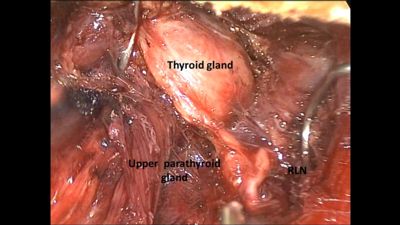 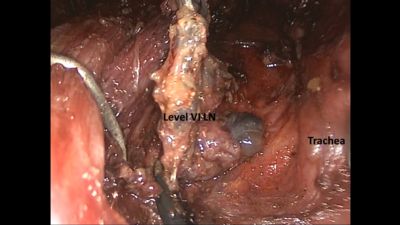 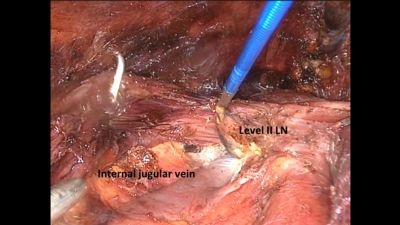 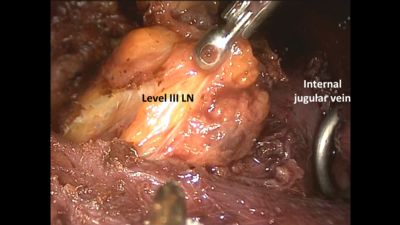 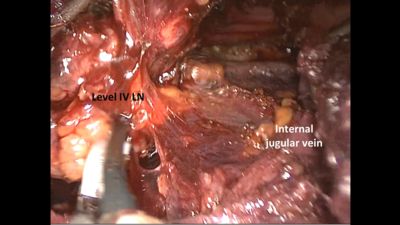