INTRODUCTION: Transanal endoscopic surgery (TEM) was developed by Buess. However, TEM has slowly gained widespread acceptance among colorectal surgeons because of the need for specific training and the high cost of specialized instrumentation. At the other extreme, laparoscopic surgery has rapidly spread throughout the world with the development of improved instruments. Some laparoscopic surgeons have reported single port access surgery using a SILSTM (single-incision laparoscopic surgery) port. We have used this port to perform the procedures such as cholecystectomy, colectomy, appendectomy, and hernioplasty. While using the SILSTM port, we developed a great interest in its shape and soft material and realized that the shape of the SILSTM port resembles that of the anal canal. We therefore considered whether single-incision laparoscopic surgery could be used to perform transanal endoscopic microsurgery (SILSTEM). And we received institutional review board approval for this procedure. We present the clinical application of this technique and its short-term results. SILSTEM is suggested to be an effective technique for the resection of rectal tumors.
METHODS AND PROCEDURES: Between December 2010 and August 2011, three patients underwent SILSTEM. All three operations were performed the same colorectal surgeon. Bowel preparation was done the day before surgery. After spinal anesthesia, the patient was placed in the adequate position. A SILSTM port was gently introduced into the anal canal, and the bowel was extended by carbon dioxide insufflation. A 5-mm laparoscope was set in the port. After a clear view was obtained, indigo carmine was sprinkled around the lesion with the use of an injection-needle to demarcate the border between the tumor and the normal mucosa. A 5-mm safety margin of normal mucosa was defined by coagulation marks. The needle was then introduced into the lower layer of the lesion, and an adequate volume of saline was injected into the submucosa. The tumor rose from the submucosa. The tumor was completely excised from the rectal wall with the use of an ultrasonic surgical scissors. After the defect created by resection was irrigated with saline solution to prevent local recurrence, the defect was closed with the running sutures, using the laparoscopic suturing device and clips.
RESULTS: The SILSTEM operations were successfully completed in the three patients without other procedure. The median operation time was 140 (101-284) min, and the blood loss was less than 5 ml in all patients. The three patients had no nausea or abdominal distension during or after the procedure. The median tumor size was 20 (8-48) mm and the final pathological findings were T1 in adenoma, Tis cancer in adenoma and carcinoid. There was no fecal incontinence or soiling during postoperative follow-up. The median postoperative hospital stay was 4 (2-8) days.
CONCLUSION: SILSTEM is a new, useful, well-tolerated technique in our experiences. However, further experience and clinical trials are needed to fully define the advantages, disadvantages, and indications of this procedure.

We have no conflict of interest. 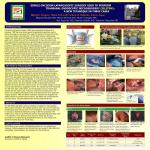