Introduction: For patients with lower rectal malignant tumor located within 4-5 cm from the anal verge, intersphincteric resection (ISR) was developed to avoid permanent colostomy. However, controversy still persists regarding the appropriateness of laparoscopic surgery (LS) for patients with lower rectal malignant tumor because of concerns over the safety of the procedure and of the uncertainty of the long-term outcome. Laparoscopic rectal excision involves many procedural complexities and technical difficulties, and LS in patients with lower rectal malignant tumor is still technically demanding. The aim of the present study was to evaluate the short-term surgical outcomes of laparoscopic intersphincteric resection (Lap-ISR) for lower rectal malignant tumor.
Patients and Methods: A review was performed of a prospective registry of 33 patients who underwent curative Lap-ISR for lower rectal malignant tumor between July 2002 and June 2011. Candidates for Lap-ISR were basically patients who were preoperatively diagnosed with T1N0M0 or T2N0M0. After full mobilization of the left side colon and rectum, the intersphincteric plane between the puborectalis and the internal sphincter was dissected cautiously as caudally as possible under laparoscopic vision. Then, anal canal mucosa and the internal sphincter were circumferentially incised, and the intersphincteric plane was dissected by the anal approach. A per anum handsewn coloanal anastomosis was performed. Patient demographics and outcomes were recorded prospectively.
Results: Operations were performed by three consultant surgeons, and all operations were completed laparoscopically in this series. There was no perioperative mortality. Thirty-two patients had lower rectal cancer, and one patient had lower rectal carcinoid tumor. The median follow-up was 22 months. The median operative time was 358 minutes, and the median blood loss was 108 ml. Liquid and solid foods were started on median postoperative day 1 and 2, respectively. The median postoperative hospital stay was 8 days. Thirteen postoperative complications occurred in 11 patients (33 percent), including subclinical anastomotic leakage in 1 and bowel obstruction in 2. Reoperation was not required in the present series. All the patients underwent ileostomy closure; however, one patient with a past history of esophagectomy for esophageal cancer hoped for a permanent stoma after ileostomy closure, because of diarrhea. The positive margin rate was 0 in the present series. At the end of the study period, cancer recurred in two patients (6.1%). One patient with pathological Stage IIIC developed para-aortic and midiastinum lymph node metastasis 4 years after the initial operation, and another patient with pathological Stage I developed pulmonary metastasis 2 years after the initial operation.
Conclusion: Lap-ISR for lower rectal carcinoma is technically feasible and oncologically appropriate for selected patients with lower rectal malignant tumor. It remains unclear, however, whether Lap-ISR is equivalent to conventional open surgery in terms of long-term oncological outcome and functional outcome, and this can only be answered through the accumulation of more patients prospectively, considering the fact that RCT with a sufficient number of patients comparing open and laparoscopic ISR is lacking. 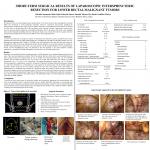