ROBOTIC COLORECTAL SURGERY IS GOING TOWARDS CENTRALIZATION: A NATIONWIDE ANALYSIS

Introduction: Robotic techniques have been developed to facilitate application of minimally invasive techniques and to overcome limitations of laparoscopy. While robotic surgery has been performed almost for two decades, data about the trends and adoption of robots in colorectal practice is scarce. This study aimed to show implementation of robotic technology in colorectal surgery.

Methods: Patients underwent robotic surgery between the beginning of 2013 to first half of 2017 in Turkey were included. Data were obtained from a prospectively maintained database. Patient, surgeon and hospital identifiers were encrypted. Parameters were operation type, operation year, robotic system used (S, Si, Xi), hospital volume and surgeon volume. High volume robotic colorectal hospital and surgeon was defined as the caseload within the forth interquartile (75th -100th) based on the median value.

Conclusions: Robotic practice in the field of colorectal surgery has been going towards monopolization which seems reasonable to achieve better outcomes by increasing caseload per hospital/surgeon. Majority of the surgeons abandoned robotic practice without reaching baseline learning curve levels. 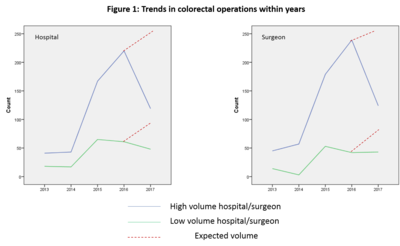