Background and Objectives: The rate of hernia at stoma site has been reported as 32% following colostomy reversal. This prospective study focused on the patients who underwent laparoscopic colostomy closure after laparoscopic Hartmann’s for severe diverticulitis, and was specifically aimed at investigating if mesh placement could be accepted as a safe and effective strategy of tissue reinforcement for prevent the stoma site from developing a hernia.

Methods: A prospective database involving three surgeons in our institute was mined to identify a consecutive series of patients from April 1991 to May 2011, who underwent laparoscopic colostomy closure after the laparoscopic Hartmann’s for emergently managing severe diverticulitis at the Texas Endosurgery Institute. All the perioperative information was processed by SSPS.

Results: Among 41 patients with laparoscopic Hartmann’s for the perforated diverticulitis, 33 had the procedure of laparoscopic colostomy reversal with the rate of 80.5%. Of these 33 stomas, 29 were reinforced with Paritex Composite mesh. The operating time (OR) was 124.8 +/- 66.6 minutes including laparoscopical colostomy takedown, intraoperative colonoscopy, as well as reestablishment of intestinal continuity. Blood loss during the operation was 86.3 +/- 72.9 ml. Postoperatively none of the patients developed any major or minor complications, and length of hospital stay is 5.1 +/- 3.3 days. Lastly in the one-year follow-up, one patients was diagnosed as anastomotic stenosis while no one was found to develop either hernia or wound infection at the stoma site.

Conclusions: Laparoscopic colostomy reversal can be safely performed in the restoration of colonic continuity with low postoperative morbidity and short hospital stay. Moreover, application of mesh such as Paritex Composite to the stoma site has been effectively prevent from the developing the stoma hernia and did not cause gross wound infection at the stoma site. 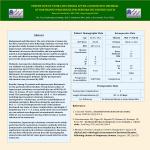