Preparing Residents for the FLS Skills Exam: A Competition Based Approach

INTRODUCTION: The purpose of this educational study was to assess the progress of the Fundamentals of Laparoscopic Surgery (FLS) skills among General Surgery residents when they participated in a competitive tournament. Our hypothesis was that this competition would motivate residents to practice the FLS skills—resulting in improved times. Also, we hoped that this competition would prepare residents for the FLS exam and would result in improved intra-operative skills.

METHODS AND PROCEDURES: In March of 2013, nineteen General Surgery residents at William Beaumont Army Medical Center participated in a competition based on the five FLS manual skills. Five months prior to the competition, residents recorded baseline times in each skill. Residents were notified of the competition and encouraged to practice.

The tournament was a single elimination tournament in which two residents competed against each other in all five of the FLS manual skills. All times were added for a total time. The resident with the fastest total time advanced in the tournament. One round of matches was done per week to allow residents time to practice between each round. Either an attending staff surgeon, or an observing resident proctored each match.

Some minor adjustments were made to the rules of FLS to create a fair competition and to assess accuracy as well as speed. Penalties of 10 seconds were added for deviations or errors during the competition in each event. For example, a 10 second penalty was added when a peg was dropped during the peg transfer.

RESULTS: Individual resident times improved on average from baseline in all five events. On average, residents improved their peg transfer time from baseline by 18.6%, circle cut by 37.5%, endoloop by 37%, extra-corporeal knot tie by 33.3%, and intra-corporeal knot tie by 46.6%. Among first year interns who had little prior exposure to the FLS events, the improvement was greater in 4 of 5 events.

CONCLUSION: Resident times improved in each FLS manual skill. This was likely due to practice done by each resident—motivated by the added incentive of participating in a friendly competition. Such an event is a creative and enjoyable way a residency program can encourage residents to practice FLS skills in order to prepare for the FLS manual skills exam and improve intra-operative skills. 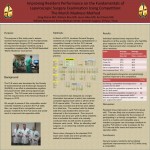