Objectives:
Laparoscopic low anterior resection for rectal cancer is still technically difficult because the pelvic space is deep and narrow. Furthermore, laparoscopic surgery has a limited two-dimensional display of the operative field, thus, requires a detailed understanding of local anatomy. It is important to assess the many variations in vascular anatomy and adjacent organ, preoperatively. This study was aimed to simulate the laparoscopic low anterior resection for rectal cancer by CT colonography (CTC) with CT angiography.

Results:
All eight examinations were successful and diagnostic. The CO2-filled colorectum was totally distended from cecum to lower rectum. Due to the arterio-veous phase, vascular anatomy was clearly identified without divergence. 3D-CT angiogram demonstrated the precise vascular anatomy of the inferior mesenteric artery giving rise to the superior rectal artery, left colic artery, sigmoid artery, and marginal arteries. The inferior mesenteric vein was shown which runs near the left colic artery. Vascular variants of inferior mesenteric artery were clearly identified. Angiogram also revealed the variable branches of internal iliac artery in the pelvis, including the inferior vesical arteries of neurovascular bundles, and middle rectal arteries. Inferior vesical artery was well contrasted suggesting abundant blood flow. Laparoscopic low anterior resection was performed with precise lymph nodes dissection and ligation of vessels in all cases as preoperatively simulated by CTC. Adjacent organs were safely preserved. 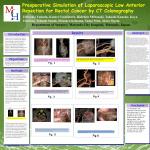