Laparoscopic Roux-en-Y Gastric Bypass (LRYGB) has become the gold standard for surgical weight loss in the morbidly obese. The success of LRYGB may be measured by excess weight loss (EWL), and several variables have been identified as independent pre-operative predictors of EWL. However, current models of estimating EWL, based on multivariate regression analysis, are poorly prognostic. Artificial neural networks (ANN) are advanced, continually adapting computational systems taught to identify complex non-linear relationships among variables correlated with an outcome. We used ANN modeling to derive a reasonable estimate of expected post-operative weight loss using known pre-operative variables. Additionally, we used ANN modeling to predict whether 50% excess weight loss will be achieved by one year postoperatively.

1621 patients who have undergone bariatric LRYGB with a Roux limb <150 cm from 2004-2013 were reviewed. Of these, 647 patients had sufficient data for analysis. Endpoints were %EWL at 180 and 365 days (EWL180 and EWL365, respectively). Previously validated pre-operative factors were analyzed, including age; race; gender; pre-operative BMI (BMI0); hemoglobin; and previous diagnosis of hypertension (HTN), diabetes mellitus (DM), or psychiatric disorder. Variables associated with EWL in bivariate analysis (P<0.1) were included in multivariate linear regression (MLR). Variables significant in MLR (P<0.05) were input into five-node back-propagation ANNs (ANN180 and ANN365 [Figure 1A]). The ANN output is an estimation of %EWL. Using ANN modeling, a receiver operating characteristic curve was generated to predict 50% EWL at 365 days.

Successful postsurgical weight loss is dependent on multiple preoperative and postoperative factors. The ANN model demonstrated age, DM, HTN, BMI0, black race and male gender as independent markers for a less successful operation. Using an easily obtainable and quantifiable subset of independent pre-operative predictors, an ANN model allows for development of a patient-centered tool with which to obtain an optimized estimate of post-surgical EWL at 6 and 12 months. Bariatric surgeons may opt to incorporate this model as a screening tool, or for patients to access, to assess the likelihood of meeting their goals. 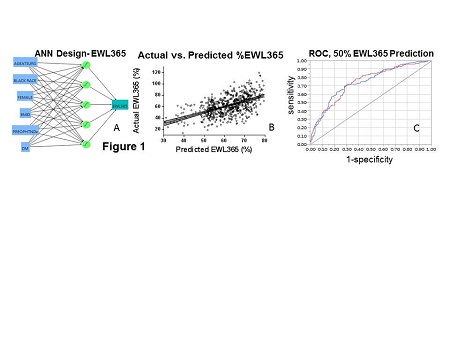