Introduction: Pancreaticoduodenectomy (PD) is the standard of care for patients with resectable malignant diseases of the periampullary region. Leaks from the hepaticojejunostomy (HJ) are estimated to range between 2-8%. Although leaks from the pancreaticojejunostomy (PJ) are more common than those from the HJ the impact of these complications can be equally severe, and the management nearly as complex. Despite this, biliary leaks from the HJ following PD has been underreported in the literature compared to leaks from PJ. Interventional radiologists (IR) have become a critical part of the team caring for patients with complications following PD.  We report on a patient in whom PD was complicated by a complete disruption of the HJ anastomosis treated percutaneously by a novel IR intervention.

Case Report: A 31 year old female with a significant history of Familial Adenomatous Polyposis and Gardner’s syndrome presented for evaluation of multiple, diffuse, duodenal polyps, including the periampullary region that were found to harbor low grade dysplasia. The patient underwent a PD in the standard open fashion. On post-operative day 5 the patient became unstable and was transferred to the Intensive Care Unit. She was found to have a biliary leak related to a complete dehiscence of the HJ anastomosis.  Percutaneous transhepatic cholangiography (PTC) was performed demonstrating a complete dehiscence of the HJ. Retrograde transjejunal access was obtained percutaneously and subsequently a guidewire was advanced via this access and snared through the PTC access for definitive internal/external drainage via an antegrade approach. Serial cholangiograms demonstrated a progressive decrease in the severity of the bile leak as well as decreased output from the perihepatic percutaneous drains. The final cholangiogram performed two months after the initial operation demonstrated no residual leak and free flow of contrast through the previously dehisced hepaticojejunostomy.

Discussion: According to the International Study Group on Pancreatic Fistula model our patient had a grade C bile leak which was successfully treated via an antegrade percutaneous transhepatic-transjejunal approach. To our knowledge this is the first case to describe the utilization of IR to salvage a completely disrupted HJ anastomosis following PD, therefore, avoiding the high morbidity associated with reoperation. The field of IR is rapidly expanding with numerous applications that have been proven to provide a less invasive approach in managing post-surgical complications.

Conclusion: Complete dehiscence of the hepaticojejunostomy anastomosis can be successfully managed with a novel IR intervention reducing the morbidity of reoperation. 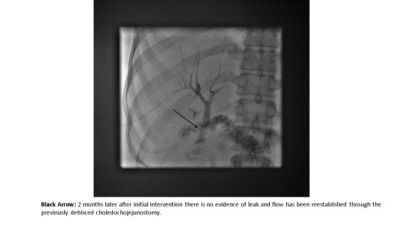 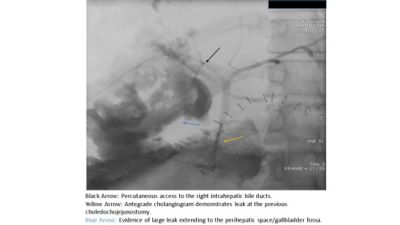 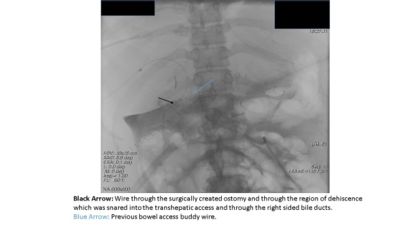 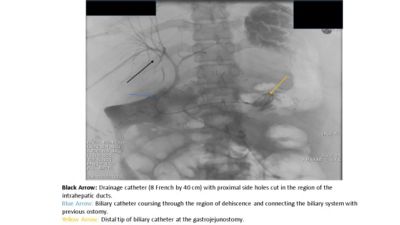