INTRODUCTION – The utility of percutaneous endoscopic gastrostomy (PEG) decompression for inoperable malignant bowel obstruction is well documented. However, there is limited data on the use of decompressive PEG in the setting of prolonged ileus and complicated non-malignant bowel obstruction. Publications addressing this indication are few in number and tend to address feasibility, not outcomes. The aim of this study was to assess the safety and short-term outcomes of decompressive PEG for prolonged ileus and complicated non-malignant obstructions.

METHODS – After IRB approval, we conducted a retrospective chart review of all PEG insertions completed by 5 surgical endoscopists at Cleveland Clinic main campus between 2010 and 2013. Cases were identified by our financial department based on billing codes. We identified and analyzed a total of 50 consecutive decompressive PEG cases for prolonged ileus or non-malignant obstruction. Pre-procedural, perioperative, and post-procedural data was extracted for analysis from our computerized charting system.

RESULTS – Our cohort of 50 patients (28 female, 22 male) had a mean age of 59.6±13.9 years. To our knowledge, this is the largest series ever reported for this indication. Eight patients (16.0%) had less than 3 comorbidities, 20 (40.0%) had 3-5 comorbidities, 9 (18.0%) had 6-10 comorbidities and 9 (18.0%) had over 10 comorbid conditions. All patients had previous abdominal surgery and all but 2 PEGs were done during inpatient admission. Indications varied considerably and are listed in the table provided. No intra-procedural complications were encountered and there were no 30-day mortalities. PEG placement was successful in all 50 (100%) cases. Failed PEG attempts were included in the billing codes utilized; hence, this should reflect the true success rate over the study period. One (2.0%) outpatient PEG-associated bleed requiring a brief admission for conservative management was the only procedure-related complication encountered. One case (2.0%) ultimately required emergency laparotomy for concern of ongoing small bowel obstruction with signs of ischemia after the PEG insertion. This patient had extremely high operative risk (previous multi-organ transplant, dialysis-dependent renal disease) and was found to have a non-compromised internal hernia in a hostile abdomen. The mean pre-procedural length of stay was 14.2±8.9 days as compared to 6.4±5.3 days post-procedure. The 30-day readmission rate was 14.0% (7 patients). Of these, 4 (57.1%) were for unrelated issues, 2 (28.6%) were brief admissions for emesis with an appropriately functioning PEG and one (14.3%) was for definitive operative management of a chronic obstruction in a high-risk patient.

CONCLUSION – Decompressive PEG insertion is a safe and effective method of alleviating obstructive symptoms in patients with prolonged post-operative ileus and complicated non-malignant obstruction. It is especially useful for discharge facilitation in high-risk patients or those with a hostile abdomen and may be used as a bridge to definitive repair. 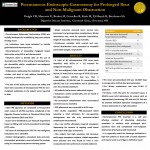