Introduction: Now a days, NOTES (Natural Orifice Translumenal Endoscopic Surgery) is partially accepted as a concept of minimally invasive maneuver that prosecutes the development of new technology and techniques. Gastric SMT has been one of the commonly performed NOTES procedures named LECS (Laparoscopy and Endoscopy Cooperative Surgery) until date, with the majority of technique being performed EFTR (Endoscopic Full-thickness Resection). The cases reported here demonstrates the extremely less invasive LECS by which four cases of hybrid NOTES partial gastrectomy are performed in humans.

Methods: All of four cases were gastric SMT. Under general anesthesia, we performed intraabdominal operation for two patients and intragastric operation for two patients. For first tow intraabdominal cases, we placed 5mm port at umbilicus at first then placed additional 2 or 3 mm ports. The lesions were resected by laparoscopic coagulating shears. The rest of two cases, we fix the stomach wall to abdominal wall by PEG (Percutaneous endoscopic gastrostomy) method. Then three 3mm ports were inserted into stomach directly. After trocar placement we used 3mm electrocoagulator, retractor, and camera for resection. All of four cases, the resected SMT were retrieved from oral way by endoscope. Basically, the gastrostomy was sewn closed using laparoscopic techniques. All the patients were discharged, without major complications.

Discussion: Hybrid NOTES partial gastrectomy can be safely performed in humans. This procedure requires less incision than resected specimen by using transoral removal technique. In case of trans gastric operation the view is still low resolution and it demands high technique. Although the size of lesion is limited, this methodology may become more common in the near future. 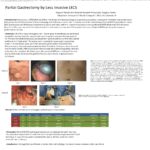