Nothing but NET: Neuroendocrine tumor masquerading as a small bowel obstruction and cecal necrosis

Case presentation: 69 yo M with BPH, COPD, and HTN who presented with a four day history of abdominal pain, vomiting, constipation and obstipation.  He had never had any abdominal surgeries.  CT demonstrated dilated loops of small bowel a transition point in the mid abdomen and submucosal fat deposition in the distal small bowel and cecum and calcified right mesenteric lymph nodes.  Creatinine was 1.8, WBC 17,000, and stable vital signs.  During exploratory laparotomy a loop of ileum had wrapped itself around an infarcted wall of the cecum (non-circumferential).   On closer inspection of the small bowel, a small nodule and tethering of the mesentery were noted 35 cm from the ileocecal valve.  An ileocecectomy was performed. 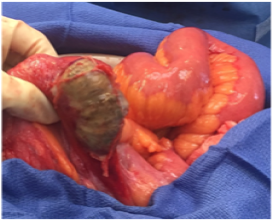 Pathology revealed transmural gangrenous necrosis of the cecum.  A 1.7 cm well-differentiated neuroendocrine tumor was found in the resected ileum.  Six of sixteen lymph nodes showed metastatic neuroendocrine tumor cells.  Surgical margins were clear from malignant cells.  The tumor was considered well-differentiated neuroendocrine carcinoma with a Ki-67 index of <3%.  Biochemical testing were significant for a 5 HIAA level of 5.2, Chromogranin A of 125 and a Serotonin level of 340. 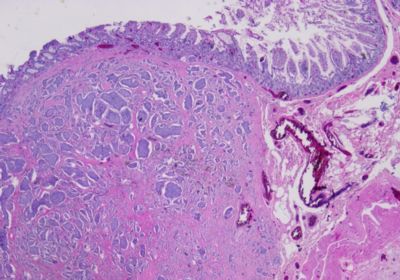 Discussion: This patient presented with a bowel obstruction, partial cecal necrosis and neuroendocrine carcinoma.  Literature suggests that cecal necrosis in the majority of cases is caused by a vascular event, occlusive or non-occlusive. The patient had atherosclerosis and an underlying malignancy which can be associated with prothrombotic states and contributes to an overall risk of thrombosis.

The cecum can sustain ischemic ischemic injury in the presence of severe or prolonged hypotension. Most frequent causes being decompensated heart failure, hemorrhage, arrhythmia or severe dehydration, only 1 of which was present in this patient.

The midgut neuroendocrine tumor is generally located in the terminal ileum, as a fibrotic submucosal tumor 1 cm or less.  Mesenteric metastases are often larger than the primary tumor and associated with fibrosis which may entrap loops of the small intestine and cause bowel obstruction. This may eventually encase the mesenteric vessels with resulting venous stasis and ischemia in segments of the intestine as seen in this patient.

Conclusion: Cecal necrosis is a rare entity, but its incidence increases with age. Isolated cecal necrosis may manifest as a CT-negative appendicitis or a small bowel obstruction in the absence of past surgical history.