Methods: Consecutive 52 patients who underwent totally laparoscopic resection with NOSE for distal sigmoid and rectal cancer between October 2006 and July 2011 were matched by age, gender, body mass index, date of surgery, tumor location, and clinical stage with patients who had conventional LAP.

Results: The number of lymph nodes harvested and the resection margin status were similar in the two groups. The NOSE group showed lower pain score than the LAP group (POD 1: 3.7 versus 5.6; P=0.078) and fewer patients in the NOSE group required additional parenteral analgesia (17% versus 30%; P = 0.050). The mean time to first passage of flatus was shorter in the NOSE group (P=0.001), but the hospital stay was similar in two groups. The NOSE group had less surgical morbidity than the LAP group, but the difference was not significant (P = 0.228). NOSE was associated with significantly better cosmetic results than LAP (mean numerical rating scale 9.3 versus 7.0; P = 0.016). After a median follow-up of 30 (range 2–55) months, there was no transvaginal access-site recurrence or posterior colpotomy-related complications.

Conclusion: the NOSE approach is feasible with favorable short and median-term surgical outcomes. 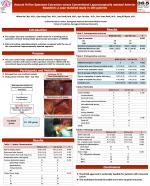