MDCT navigation for LA via a single umbilical incision 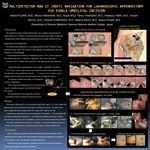