Introduction: Broader acceptance and legalization of both recreational and medical marijuana use is occurring in the United States. Although it is known to stimulate appetite, the influence of marijuana use on body mass index (BMI) is disputed in literature. Data is scarce regarding the effect of marijuana use in patients who undergo bariatric surgery, and thus, our aim was to determine whether its use has an effect on weight loss following laparoscopic sleeve gastrectomy (LSG).

Methods: Patients that underwent LSG were identified retrospectively using a prospectively maintained database. All patients were evaluated preoperatively by a multidisciplinary team, which includes a psychological stability evaluation to undergo surgery. Patients were included if they used marijuana preoperatively, either illicit or prescribed, and these patients were compared to those without marijuana use. An exclusion criterion was the usage of other illicit substance. Primary endpoint was percent excess weight loss (%EWL) at 3, 6, and 12 months, and secondary endpoints included intraoperative blood loss, operative time, length of hospitalization, and complications. 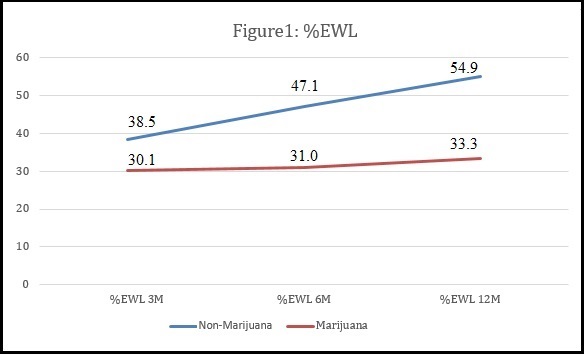 Conclusion: Our series demonstrates that patients who use marijuana prior to LSG have a significantly lower %EWL.