Management of a Recurrent Pancreatic Pseudocyst 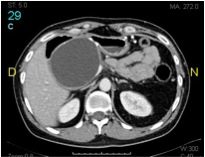 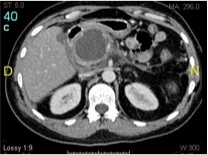 Pancreatic pseudocyst is a well-defined fluid collection, but without solid components, which occurs 4 weeks after an interstitial or edematous pancreatitis episode. The natural history is to resolve spontaneously in a period of 4-6 weeks in more than 85% of the time. Persistent pseudocyst should be treated surgically, including the percutaneous, endoscopic and laparoscopic techniques, based on the size, localization and symptoms of it.

We present a 47 years old male, with history of hypertension and one episode of acute edematous pancreatitis 3 years ago, complicated with a pancreatic pseudocyst, treated with a laparoscopic transgastric cystogastrostomy. Was admitted to the department of surgery under the clinical diagnosis of acute pancreatitis. The laboratory analysis of blood and CT confirmed an acute edematous pancreatitis, requiring medical management, with a good response, and a hospital care for 6 days.
The patient was readmitted 72 hours after, with a new episode of epigastric pain accompanied by nausea and plenitude; the CT confirmed the presence of a pancreatic pseudocyst which was located behind the head of the pancreas, with a 8.5 x 6.9 x 4.8 cm dimensions, with an image of a septum and a volume of 330 mL.
A new surgical treatment was the choice, with a laparoscopic technique; patient in French lap position, using 4 laparoscopic ports, transgastric approach with a gastrotomy of 5 cm, followed by a puncture on the posterior wall of the stomach to confirm the correct site for the cystogastrocystostomy, which was made with an endoscopic stapler, we created a 5 cm anastomosis. The gastrotomy was closed with a hand sewn absorbable suture; the procedure time was 75 minutes.
The patient had a good recovery, with a 3-day hospital care, with an outpatient follow-up at 2 weeks and 2 months. However, the patient presents 11 weeks after the surgical procedure, icteric, with a 72 hours episode of mesogastric pain, with nausea and emesis. Laboratory blood test showed an obstructive biliary pattern. The CT and MR confirmed a pseudocyst in the same location with an 11.5 x 10.4 x 9 cm size, and a volume of 686 mL (MR).
The endoscopic approach was used, the anastomosis was occluded with gastric debris, we used a double pigtail stent to communicate the cyst and stomach; also deployed a 10mm x 10cm stent in the biliary duct. The obstruction was solved, confirmed with the blood test and symptoms solution. Reducing the volume to 188 mL 2 days after the procedure.

Generally, the spontaneous regression in the acute pancreatitis scenario occurs in 85%; but those related to a chronic pancreatitis only have a regression in 9-31%. One etiology that must be considered is the disconnected pancreatic duct syndrome, which is related to a necrotizing acute pancreatitis, with the lost of communication between the pancreatict duct and the gastrointestinal tract; reporting a mayor chance of recurrence.
The anatomic study of the pancreas is imperative for the full comprehension of this pathology, and for the surgical solution of this case. 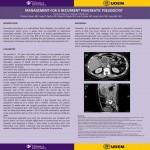