INTRODUCTION:
Patients with Crohn’s disease often experience cycles of acute attacks with periods of quiescence or chronic low grade disease. When patients become symptomatic, it is often difficult to tell whether the disease is amenable to medical management or if surgical intervention is required. These patients frequently get a gamut of tests in order to arrive at the correct diagnosis.

Magnetic Resonance Enterography (MRE) has emerged as a highly sensitive and potentially safer alternative to Computerized Tomography (CT) scanning for determining the extent and type of disease (inflammation versus stricture). In this study, we aimed to identify the radiological imaging studies received by patients who underwent surgery for Crohn’s, and whether MRE offers more definitive benefit in surgical planning over CT.

METHODS and PROCEDURES:
We conducted a retrospective review of patients with Crohn’s disease who underwent intestinal surgery at our institution during a 4-year period (2006-2012). We reviewed CTs, MREs, and operative reports to find trends. McNemar’s test was run to detect marginal homogeneity between CT and MRE. MRE is acquired after oral intake of water with psyllium to distend the small bowel prior to examination (2 teaspoons of psyllium/450 cc of water, repeated four times over a three hour period). 1.0 mg IV glucagon is administered to eliminate bowel peristalsis; 15ml of IV gadolinium is used as a contrast agent. Pulse sequences are obtained, and are read by a single body imaging specialist.

RESULTS:
56 patients underwent intestinal surgery for Crohn’s disease. We excluded five patients who underwent stoma reversal, diverting ostomy or lysis of adhesions alone. In total, 51 patients underwent bowel resection for Crohn’s. Only 3 patients underwent stricturoplasty as a secondary procedure to the bowel resection. 29/51 (56.8%) of this patient population underwent MRE preoperatively. 13/51 (25.5%) patients had 2 or more pre-operative CT scans obtained (Max 12, [6 of 29 with MRE, 7 of 22 without MRE]). On average, MRE was obtained 4.1 (SD 5.6) months prior to operation (range 0.1-26.3 months). Of patients who had a bowel resection, 11 (21.5%) underwent CT imaging only, 15 (29.4%) underwent MRI imaging only, 14 (27.4%) had both CT and MRE, and 11 (21.5%) had neither. Of the 25 patients with CT scans, 13 scans showed TI disease, 16 showed inflammation or thickening, and 2 scans clearly delineated a stricture. Of the 27 with MREs, 12 showed TI disease, 21 delineated strictures. Of the fourteen patients with both imaging types, only one stricture was identified by CT scan, compared with 10 patients identified with stricture by MRE (p=0.003). Patients who had non-specific inflammation on CT were significantly likely to have stricturing disease on MRE.

CONCLUSION:
Since MRE was usually obtained several months prior to ultimate operation, it may not serve as the tipping point for surgery, but it is clearly superior in delineating strictures when compared to CT. This, combined with limited radiation exposure, makes it the imaging modality of choice in surgical patients with intestinal Crohn’s disease. 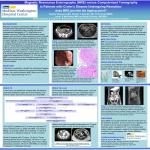