INTRODUCTION: Bariatric surgery, such as gastric bypass, decreases insulin resistance in patients with type 2 diabetes mellitus.  One proposed weight-independent mechanism involves “upregulation” of ileal incretin secretion in response to expedited delivery of nutrients and digestive enzymes to the distal ileum. We hypothesize that Magnetic Duodenal-Ileal Bypass (DIPASS), a magnetic compression anastomosis created between the distal duodenum and distal ileum, is a feasible procedure that may reproduce similar effects to more invasive bariatric surgeries.

METHODS: Yucatan mini pigs (n = 12) were fed a high-fat diet for 3 months. Baseline intravenous glucose tolerance tests (IVGTT) were performed in the 12 fat-fed pigs and one farm pig (as normal control). 8 randomly-selected fat-fed animals underwent the DIPASS procedure using either 23 mm (n=3) or 17 mm diameter (n=5) magnets. 4 animals underwent sham operation. We assigned 2 DIPASS and 1 sham animal to be sacrificed at 2, 4, 8, or 12 weeks, at which points we measured plasma glucose and insulin following IVGTT (n=8), as well as Glucagon-like peptide-1 (GLP-1), Peptide YY (PYY), bile acids, and lipids. Animals were euthanized and the anastomoses dissected and fixed for histology.

RESULTS: At baseline, the fat-fed pigs were visibly obese, glucose intolerant (peak glucose at 5 and 10 minutes during IVGTT was 502 and 426 mg/dL versus 353 and 309 mg/dL), and exhibited elevated insulin secretion (average insulin AUC normalized to weight 1846.9 ± 1149.2 μU/mL*min versus 297.39 μU/mL*min), suggestive of insulin resistance (Fig.1). No intraoperative adverse events occurred, and all anastomoses were well-formed with burst pressures >90 mm Hg.  While two animals with 23 mm magnets lost excessive weight by 4-6 weeks (48 ± 3%), only moderate weight-loss occurred in pigs with 17 mm magnets (17 ± 13%). Fasting GLP-1 increased in DIPASS pigs, but remained stable in the sham group (Fig.2). Serum LDL, total cholesterol, and triglyceride levels trended lower in the DIPASS group. All pigs showed decreased insulin secretion following IVGTT throughout the study, suggestive of improvement in insulin resistance, with similar rates of improvement in both groups.

CONCLUSIONS: Magnetic DIPASS is a novel procedure that may provide a minimally-invasive, outpatient therapy for type 2 diabetes mellitus.  This study demonstrates the procedure is safe and feasible in a swine model, and shows trends in lipid and incretin levels that suggest it may mimic some effects of more invasive bariatric procedures. Further studies are necessary to validate its efficacy. 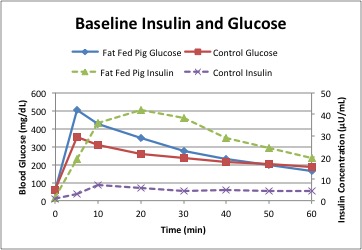 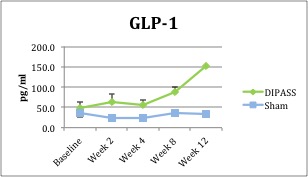