Introduction:
Although pseudocyst formation is common following pancreatitis, their erosion into the spleen is a rare, but potentially life threatening event. We report a case of intrasplenic pancreatic pseudocyst treated laparoscopically with distal pancreatectomy and splenectomy.

Methods:
A 50 year old African American male, with a past medical history significant for chronic alcohol induced pancreatitis, presented with complaints of a 3 month history of abdominal pain, worsening over the past several days. Initially, the patient was diagnosed with pancreatitis and treated accordingly. Because of the persistent pain, a computed tomography scan was obtained. The spleen was almost entirely replaced by a 9 cm subcapsular fluid collection suspicious for an intra-splenic pseudocyst. The patient underwent electively laparoscopic distal pancreatectomy and splenectomy.

Results:
There were no intraoperative complications. The patient resumed diet on the third postoperative day and he was discharged home on day 8. The final pathology revealed a benign cystic lesion measuring 9 x 6 x 3 cm in size which was not in communication with the pancreatic duct. There were also 2 smaller pseudocysts in the pancreatic body and tail. A previous scan did not reveal any abnormalities in the spleen, and showed the other pancreatic pseudocysts. At 8 months, the patient has had no recurrent symptoms.

Conclusions:
Splenic parenchyma involvement is an unusual complication of pancreatic pseudocyst. The optimal treatment is controversial. Percutaneous drainage carries a high recurrence rate and risk of hemorrhage. Open surgery is effective, but is associated with significant morbidity. The laparoscopic offers an effective method of treatment without the potential complication of a large abdominal incision. 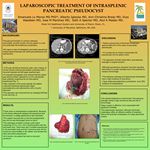