Background: In the early 1990’s, approximately 16,000 bariatric procedures were performed annually in the United States. By 2008, that number had increased to 220,000. The most common procedure performed is laparoscopic gastric bypass surgery (GBS). In most patients, GBS leads to a successful outcome with an acceptable morbidity. With the explosion in bariatric surgery, however, inherently comes an increase in the number of complications. Some patients develop severe malnutrition or food intolerance that can significantly affect quality of life. These patients are best treated by reversal of gastric bypass to the original gastrointestinal anatomy (RGBS). Reversal is a complex operation which has traditionally been performed as open surgery. Reversal is also associated with weight regain and return of comorbidities. The addition of sleeve gastrectomy to laparoscopic RGBS may help to prevent weight regain. We describe our experience and indications.

Methods: A retrospective review of a prospectively maintained database was performed. Cases were from a single center, with operations being performed by four surgeons. Between November 2004 and August 2012, 1284 patients had bariatric surgery and 991 of these were gastric bypass surgery. Six patients underwent complete laparoscopic RGBS to original anatomy. The indications for reversal were nonhealing marginal ulcer with recurrent symptoms, severe food intolerance with excessive weight loss, short bowel syndrome following small bowel resection due to internal hernia, and persistent pain. Two patients had complete reversal with the addition of sleeve gastrectomy to mitigate weight regain.

Results: There were six patients total, four females and two male, aged 29 to 52 years. The RGBS was performed between two and 53 months after the original GBP. Operative times ranged from 218 to 337 minutes. There were no intraoperative complications. The length of stay in the hospital ranged from two to 18 days. The first four patients were followed from five to 30 months postoperatively. The last two patients were discharged recently and have not been seen in follow up yet. There were three postoperative complications. One anastomotic leak was seen at the anastomosis of gastric pouch to gastric remnant. This was treated conservatively with bowel rest, no additional interventions were required. The patient was fed eventually without any difficulty and discharged home after 18 days. Two patients developed delayed gastric emptying. One did not require any intervention, the other required endoscopy with dilatation of the pyloric channel and botox injection.

Conclusions: Laparoscopic reversal of gastric bypass is feasible and safe and can result in baseline level of functionality and resolution of symptoms. The addition of a sleeve gastrectomy is also feasible, and can serve to prevent weight regain after reversal. 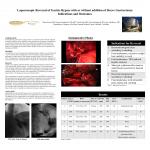