Transplant patients are at increased risk for hernia formation due to the impairment in normal collagen synthesis and wound healing process inherent to postoperative immunosuppressive therapy. After kidney transplantation, the incisional hernia formation ranges from 1.6 to 18% and most of the cases presented within the first 5 years post-transplant.

In the general population, hernia recurrence after primary repair approaches 50%, the addition of mesh has lowered that number to about 6-29%. Several authors have demonstrated the safe use of prosthetic material in the immunosuppressed host. Nevertheless, implantation of mesh by open techniques requires a large incision and wide dissection of soft tissue contributing to an increase at risk for seroma, abscess and incomplete mesh integration.

Laparoscopic surgery offers reduced tissue trauma that translates into lower risk for postoperative complications. As for now, there is only few evidence on minimally invasive ventral hernia repair this population.

A 60 year-old female with long history of hypertension was detected to be having chronic renal failure in 2000; she progressed to end-stage renal disease two years later and started on maintenance hemodialysis. She underwent a heterotopic cadaveric renal in 2003, graft was placed in an extra-peritoneal fashion in the right iliac fossa through a “J-shaped” incision. She was on chronic immunosuppressive therapy.

Three years after surgery, she noted a progressive painless protrusion on her right flank. She underwent an open hernia repair with polypropylene mesh placement that complicated with incomplete mesh integration. In 2010, prosthetic material was removed and primary approximation performed with recurrence at six months post-op. She expressed chronic abdominal pain and social inhibition from her appearance.

On examination, at the upper edge of the transplant scar, a giant 30×20 cm soft mass extending from the costal margin to the right iliac fossa was palpable. The rest of the examination was unremarkable. Abdominal CT scan demonstrated a migration of omentum and small bowel into the hernia sac. The patient was scheduled for an IPOM repair.

Veress needle was inserted at Palmer’s point for creation of pneumoperitoneum and three trocars were placed at the left middle clavicular line. A 12 cm wall defect was observed with the transplanted kidney located at the lower edge. The hernia sac contents were completely reduced and adherensiolysis performed with bipolar energy. A polypropylene mesh with hydrogel barrier (Ventralight, Davol Inc.) was introduced, prosthesis corners were anchored with trans-facial prolene sutures and circumferentially fixated to the abdominal wall with absorbable tackers.

The post-operative course presented no further complications and the patient was discharged on PO day 3. At three months-follow up the patient no protrusion or recurrence has been noted.

Compared to early surgical complication (graft rejection, vascular or urological complication), incisional hernias have a minor impact on patient and graft survival however, it has a deleterious role on patient quality of life. Postoperative wound complications are minimized with laparoscopic hernia repair with low recurrence and morbidity rates. Incisional hernia can then be safely repaired with minimally invasive techniques in the transplant population. 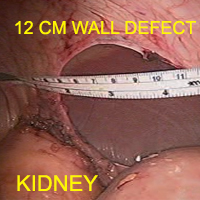 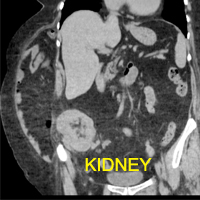 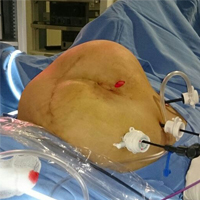 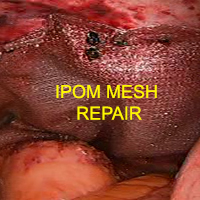