Vertical midline fascial plication is a procedure commonly used during standard abdominoplasty in order to correct diastasis of the rectus abdominus muscles. This permanently distorts the fascial anatomy of the anterior abdominal wall, creating a double midline fascial layer, which can interfere with a standard open periumbilical abdominal entry technique if the patient requires laparoscopic surgery.

A small horizontal skin incision is made along the pre-existing circumumbilical scar from the previous abdominoplasty, and is deepened to expose the layer of rectus abdominus muscles. The fascia is grasped on each side of the midline with Kocher clamps and elevated, then a vertical incision is made in the plication scar with a scalpel. Any remaining suture material from the abdominoplasty is removed. Stay sutures are placed in both sides of the plicated tissue and then the muscles are retracted laterally with “S” retractors in order to expose the true anatomical midline linea alba. This fascial layer is then grasped with Kocher clamps, elevated, and incised vertically with a scalpel. The anatomical fascia is retracted laterally in order to expose the peritoneum, which is grasped and incised, allowing introduction of the Hasson cannula into the abdominal cavity. The stay sutures are secured to the cleats of the Hasson trocar and pneumoperitoneum may be achieved. Once the intra-abdominal portion of the procedure is complete, the Hasson is removed and the plicated muscles are re-closed using the stay sutures placed in the beginning of the procedure.

Twenty-four consecutive patients with a previous history of abdominoplasty with midline fascial plication, all women, underwent elective laparoscopic cholecystectomy. Peritoneal entry was successfully achieved in all patients by a surgical trainee under the supervision of the authors using the technique described above. All patients were evaluated in the office setting four weeks postoperatively. No intraoperative or postoperative complications or incisional hernias occurred. 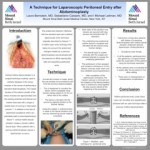