INTRODUCTION: Loop ileostomy is frequently performed to divert the fecal stream following cases involving low pelvic anastomosis, radiated operative fields and complex colorectal procedures. Although construction of loop ileostomy reduces the morbidity associated with anastomotic leak, the incidence of complications following open ileostomy closure is reported as high as 40%. We hypothesize that laparoscopic technique for ileostomy closure is a safe and feasible approach and can reduce complication rates. We describe our approach and results for laparoscopic takedown of loop ileostomy.

METHODS AND PROCEDURES: Between January 2007 and September 2012, 154 consecutive patients underwent laparoscopic ileostomy closure. Demographic, intraoperative, and postoperative data were assessed. A 5-mm optical trocar was used for abdominal entry under direct visualization. Laparoscopic exploration was performed (Figure 1a, 1b) and up to three additional trocars were placed for adhesiolysis and to release the proximal and distal small bowel limbs for tension free extraction (Figure 1c). The ileostomy was dissected from the peritoneal attachments at the level of the fascial ring (Figure 1d). The stoma was readily dissected under direct visualization and extracted for resection and extracorporeal anastomosis (Figure 1e). The fascia and skin were closed and the integrity of the closure was assessed (Figure 1f) laparoscopically.

CONCLUSIONS: Laparoscopic technique is a safe and feasible modality for closure of loop ileostomy and offers several advantages over an open approach. The laparoscopic approach affords safe entry into a reoperative field and facilitates assessment of the abdominal cavity to rule out metastases in cases involving malignant disease. Direct vision and mobilization of the afferent and efferent limbs leading to the ostomy prevents traction injury to the small bowel during extracorporealization for anastomosis. Furthermore, the ileostomy is able to be released and the anastomosis is performed away from the abdominal wall thus potentially limiting contamination and ensuing infections. Upon completion of the reversal, laparoscopy can inspect the closure of the ostomy site ensuring complete closure and no inadvertent injuries occur during fascial closure. In addition, the laparoscopic approach has the potential for decreased rate of necessitating a midline incision and wound infections at the ostomy closure site. 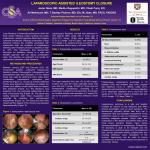