Results:
Data were compared from 22 laparoscopic vs. 16 open anterior resections (there was one laparoscopic to open conversion). There was no significant difference in mean total theatre time (to include anaesthetic/epidural and laparoscopic equipment setup times) of OAR compared to LAR (OAR=227 minutes vs. LAR = 245 minutes, t=0.741, p=0.464). No drains were inserted during any of the LAR compared to seven in OAR (p 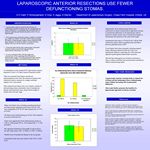