INTRODUCTION:We performed a retrospective cohort study of the patients who underwent either a laparoscopic (LA) or an open appendectomy (OA) in a private third level hospital in Mexico City and compared the hospitalization costs and outcomes of each procedure.

METHODS: The charts of all patients with an ICD-9 procedure code for either laparoscopic or open appendectomy performed between January 2004 and December 2008 where obtained from the American British Cowdray Medical Center database. The variables that were retrieved from the charts for each group were: age, sex, hospitalization cost, length of stay and complications. We utilized the Student t Test and the Fisher Test for variable comparison.

RESULTS: During the 5 year period, 1792 appendectomies where performed, 633 ( 35.3%) were OA and 1159 (64.6%) LA. Both groups were statistically similar with regard to gender (p= 0.075) but differed with respect to age, having an older patient population in the LA group (p<0.0001). Length of stay was significantly higher in the OA group (3.3 vs. 2.5 days, p<0.0001). The overall hospitalization cost of LA was 25% higher than the OA cost (p=0.0005). The cost of an uncomplicated LA case was 1.7 times higher than in the OA group (p <0.0001). If a complication was present in the OA group the total cost of hospitalization rose 5.5 times compared to a non-complicated OA case. In a similar fashion, in the LA group, a complication resulted in a 2.9 time increase in the hospitalization cost compared to a non-complicated LA case. We found no statistically significant difference between the hospitalization cost of an OA and the LA group when both procedures were associated with a complication, (p=0.5319). A higher complication rate was observed in the OA group 60 cases (9.47%) vs. 46 (3.96%) , p<0.0001, odds ratio 2.55. The increased rate of complications observed where related to cardiovascular, wound and infectious problems. No difference was seen between OA and LA with respect to urinary, gastrointestinal, and pulmonary complications.

CONCLUSIONS: LA offers certain advantages over OA, especially in women, as it allows for the diagnosis and definitive management of other pathologies that may cause pain similar to appendicitis. One of the drawbacks and criticisms of LA is that the hospitalization cost is considerably higher than the OA group, to be exact it was 25% more in our study (1.7 times in the uncomplicated cases). Nonetheless this calculation does not consider the slightly longer hospital stay in the OA group, nor does it take into account the increased risk of complications associated with the OA procedure and the economic burden related with them. 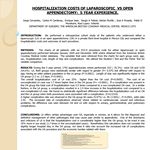