The aim of this study is to analyze the ergonomics of the surgeon's hand during the use of two different instrument handles for laparoscopic instruments. The risk level for wrist disorders is established by analyzing the information recorded by a data glove.

Twenty five right-handed laparoscopic surgeons participated in this study: 5 experienced surgeons (>100 laparoscopic procedures), 10 surgeons with intermediate experience (10-50 procedures) and 10 novices with no experience in laparoscopy. Subjects performed laparoscopic dissection and intracorporeal suturing tasks on a box trainer. For all the tasks, entry ports were set in identical spatial configuration and the height of the surgical table was adjusted according to the height of the subject and the monitor was placed at eye level. For the dissection task, subjects used ring-handled scissors (Autosuture®, Covidien) on the right hand and a ring-handled Maryland dissector (Richard Wolf GmbH) on the left hand. For the suturing task, subjects used an axial-handled needle holder (Karl Storz GmbH & Co. KG) on the right hand and a ring-handled laparoscopic dissector (Richard Wolf GmbH) on the left hand. Each task was performed on an ex vivo porcine stomach and lasted for ten minutes. The CyberGlove® data glove (CyberGlove Systems Inc.) was used to record the hand and wrist movements during the performance of the laparoscopic tasks (Figure 1). This system consists of a series of conductive sensors that register the metacarpophalangeal and interphalangeal deviation, finger separation, torsion of thumb and little finger in relation to the palm, and radiocubital flexion and extension as well as wrist deviation. Data was recorded at 100 samples per second. Risk level for wrist joint was determined by applying a modified version of RULA (Rapid Upper Limb Assessment) method. 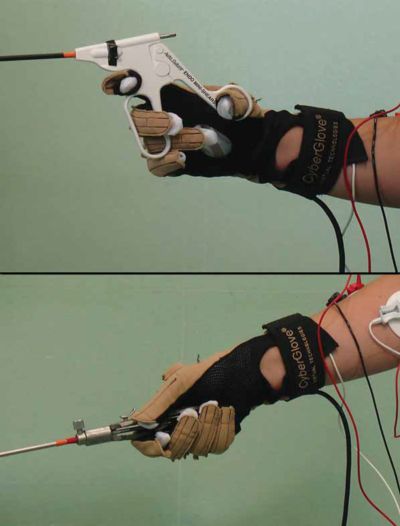 During the dissection and suturing exercises, intermediate and expert surgeons handle the laparoscopic instruments in a similar manner. When comparing both tasks, statistically significant differences are found in seven (16, 1, 4, 8, 6, 11 and 12) of a total of eleven analyzed sensors, revealing significant differences in the surgeons’ spatial configuration between both instrument handles. The four remaining sensors are related to the interphalangeal deviation of thumb, index and middle fingers. After applying the RULA method, a risk score of 3 was obtained during the dissection task for all study groups, which is considered unacceptable or hazardous. For the suturing tasks, expert surgeons obtained a risk value of 2 (wrist angle of 51.24±3.46), considered as acceptable, with all other groups maintaining a risk level of 3.

Obtained results show that the data glove allows for the distinction between two laparoscopic exercises performed with laparoscopic instruments with different handle design. The suturing exercise with an axial-handled needle holder entails a more ergonomic posture for the wrist joint, as compared to the dissection exercise performed with ring-handled scissors. Results indicate that previous laparoscopic experience is a positive influencing factor on the operating surgeons’ postures of the wrist during laparoscopic intracorporeal suturing.