Introduction: In the United States, more than 10% of bariatric procedures in academic centers are performed in elderly patients. Higher morbidity and mortality rates have been described in patients above 65 years old. However, there is limited data about the relative safety of robotic assisted sleeve gastrectomy (RA-SG) and Roux-en-Y gastric bypass (RA-RYGB) in this subset of patients. We aimed to compare 30-day safety of these procedures in geriatric patients.

Patients who underwent RA-RYGB had a longer length of hospital stay, operative time, reoperation and readmission rates within 30 days after surgery (Table 1). Major organ system morbidity was similar in both groups. There were no deaths in either group.

Conclusion: Robotic assisted bariatric surgery in patients 65 years and older appears safe. However, robotic assisted gastric bypass is associated with higher rates of reoperation and readmission. Prospective data is needed to evaluate long-term efficacy of these procedures in the elderly. 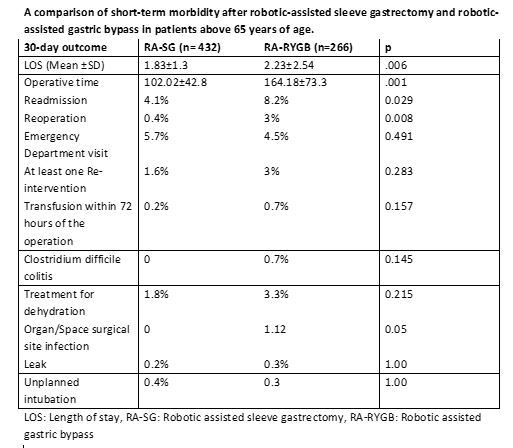