Gastrointestinal Lipomas: Is it truly a benign process

Gastrointestinal Lipoma has traditionally been viewed a benign process. It has minimal malignant potential, and it rarely causes life threatening conditions.

We report a series of 3 cases of gastrointestinal lipoma that have led to life threatening complications requiring surgical intervention.

Patient 1 was a 53 years old male, who presented with coffee ground emesis. He was found to have severe UGI hemorrhage and required 6 units of blood transfusion within the first 24 hours of admission. Patient underwent upper endoscopy where a large duodenal lipoma with surface ulcerations and stigmata of recent bleeding was noted. Endoscopic clipping was applied to control the hemorrhage. The lipoma was deemed to be too large for endoscopic resection. Patient underwent duodenostomy and surgical resection.

Patient 2 was a 64 years old female, who experienced 6 days of vague abdominal discomfort. She presented to the ER after an outpatient CT scan revealed intussusceptions of ascending colon into transverse colon. Patient was taken emergently to OR for laparoscopic right hemicolectomy. Pathology showed right colon lipoma resulting in colonic congestion and ischemia.

Patient 3 was a 52 years old female who presented to the ER with a 3 day history of abdominal pain. On further questioning, she described multiple similar episodes over the course of her life time, which resolved after 1-2 days. A CT scans demonstrated intussusception of ascending colon into the transverse colon. Patient underwent emergent laparoscopic right hemicolectomy. Pathology showed submucosal colonic lipoma with overlying mucosal erosion, inflammation, and ischemic changes.

The literature does not view gastrointestinal lipoma as a serious disease process. As a tumor, it is slow growing and low metastasis potential. It accounts for only 4% of all benign gastrointestinal tumors. The incidence of symptomatic presentation has not yet been truly documented. There are about 25 case reports of duodenal lipomas causing upper GI bleeds and 25 cases of colonic lipomas presenting with colonic intussusceptions. Because of its “benign” nature, there is no literature report or review on incidental finding of GI lipoma.

Our case series illustrates the serious clinical implications of gastrointestinal lipoma. Furthermore, they demonstrate the role of endoscopic and laparoscopic treatment in the emergent setting.

Whilst gastrointestinal lipomas are typically slow growing and rare, it is certainly not a benign disease. It has potential to cause life threatening conditions requiring emergent endoscopic and laparoscopic treatment. 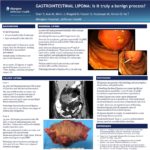