Introduction: The laparoscopic adjustable gastric band (LAGB) is a common procedure for morbid obesity: it is estimated that 100,000 procedures were performed worldwide in 2007. A major complication of the LAGB is a ‘slip’ or migration of its position on the stomach. This diagnosis is important because it may put the patient at risk for gastric necrosis or perforation and typically requires urgent surgical management. It is important to differentiate a slipped band from gastric pouch dilation, which can bemanaged non-operatively. We describe a patient that highlights this challenge and we discuss existing approaches to diagnosis and management.
Methods: A case-based analysis and literature review were completed.
Results: We analysed acase of a patient presenting with increasing dysphagia and intolerance of liquids approximately 3 years following placement of an adjustable gastric band (LAGB). The LAGB had been placed in her country of origin and she commuted from Canada for band adjustments on an ‘as needed’ basis. The patient’s weight had decreased from a baseline of 109kg (pre-op) to 70kg prior to developing dysphagia;her current weight was 63.9kg. Her family physician had prescribed motility agents, antacids and proton pump inhibitors with minimal impact. She was ultimately referred to the Weight Wise Program in Edmonton, Alberta, a multidisciplinary obesity management program with a Bariatric Surgery team. She was admitted to hospital from the Bariatric surgery clinic and a barium swallow was completed. The contrast study demonstrated a dilated esophagus and gastric pouch with near-complete obstruction at the band, which had assumed a horizontal position. A diagnosis of band slip was proposed. The port was accessed and over 8cc of saline removed. The patient reported dramatic resolution of symptoms. A follow-up contrast study the next day demonstrated restoration of appropriate band position (angle) and resolution of esophageal dilation, with no evidence of obstruction. The gastric pouch had a satisfactory appearance.
Conclusions: The LAGB has proven efficacy in the surgical management of morbid obesity. Challenges with the LAGB include appropriate patient selection and maintenance of their lifestyle change through consistent follow-up with an experienced multidisciplinary team. Aggressive band inflation and creation of excessive restriction to compensate for patient lifestyle non-compliance may contribute to morbidity including gastric pouch dilatation, band slippage and erosion. It is essential to be able to diagnose gastric pouch dilatation and its causes. Treatment of pouch dilation includes band deflation, which preserves the device and ongoing patient educational counselling. We recommend that restriction should be increased in patient’s with a LAGB commensurate with their compliance and lifestyle change in order to avoid complications. 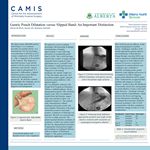