Objective of the technology or device: Sleeve gastrectomy is currently performed by firing a general purpose 60mm laparoscopic stapling device multiple times to transect the stomach. Orogastric calibration systems fail to help surgeons maintain desired distances from anatomic landmarks or align the anterior and posterior sides of the stomach during transection. This can lead to ‘spiraling’ of the stomach and ‘kinks’ which are hypothesized to contribute to an increased incidence of post-operative GERD. 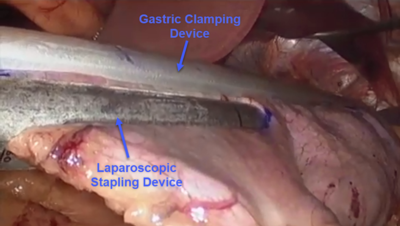 STANDARD BARIATRICS is developing a 230mm sleeve gastrectomy specific stapler. The device leverages the technique of placing the gastric clamping device and will staple and transect the entire length of the stomach in a single staple firing.

Description of the technology and method of its use or application: The STANDARD BARIATRICS sleeve gastrectomy stapler is designed to transect and staple the entire length of the stomach during a sleeve gastrectomy procedure in a single firing. An ‘anatomy-based sleeve gastrectomy’ approach is used with the stapler. The surgeon marks the stomach at set distances from key anatomic landmarks (GE junction, incisura angularis, and pylorus). The surgeon then places the stomach in the jaws of the device. As the device is closed, the device applies clamping pressure to tissue progressively from the fundus to the antrum; allowing the surgeon to position the tissue until the planned staple line trajectory is achieved. Upon firing the device, 6-rows of staples (3 rows on each side of the cut line) are formed while the tissue is transected. These staple heights vary linearly, matching thickness data collected from 40 excised sleeve gastrectomy specimens to generate a complete stress strain map of the stomach. The closure and firing systems of the stapler are motorized (rendering shown in Fig 2).

Preliminary results: Initial feasibility testing included comparative jaw deflection tests between the STANDARD BARIATRICS prototype and existing endocutters using a tissue analogue. In these tests, the STANDARD BARIATRICS prototype exhibited less deflection even though it is almost four times longer (Fig 3). We have tested a fully functional prototype of the device. Multiple firings in tissue analogues and harvested pig tissue have been completed to date (example in Fig 4). 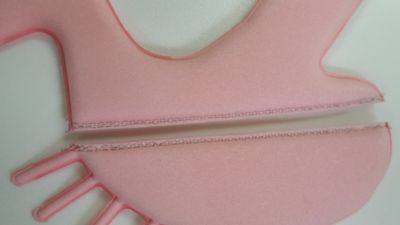