Evaluation of Learning Curve and Outcomes of Laparoscopic Sleeve Gastrectomy Based On 4-year Experience of a Single Surgeon.

Introduction: Laparoscopic sleeve gastrectomy (LSG) has rapidly become the bariatric procedure of choice due to success regarding outcomes of weight loss and addressing comorbidities. The objective of this study is to ascertain trends, outcomes and the learning curve, predicting the number of cases required for a surgeon to reach a mastery level, based on 4-year term.

Methods: A total of 250 consecutive patients who underwent LSG by a single surgeon, from January 2011 to December 2014, were the focus of our retrospective review. The cases were sorted chronologically into 4 groups, consistent with year, when the surgery was performed. Patient’s demographic, operative, postoperative characteristics and outcomes were prospectively assessed and analyzed. A cumulative sum (CUSUM) method was used to evaluate the learning curve . The one-way ANOVA test and pairwise Bonferroni comparison were used to assess the change of operative time over 4 time periods.

Conclusions: A continuous decrease in OT was observed over entire study period. Despite that more than 121 cases are needed to achive the mastery level in LSG , this doesn't impact mortality, morbidity levels nor 1-year postoperative outcomes in an experienced laparoscopic surgeon. 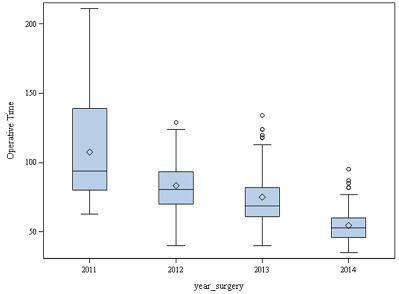 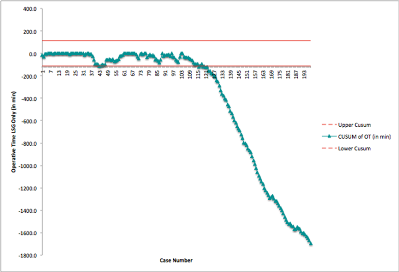 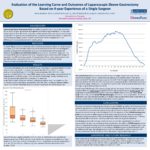