INTRODUCTION: As a new bariatric surgery procedure, LSG is rapidly gaining adepts and establishing as a stand-alone surgery for morbid obesity. It is also considered a safe procedure as compared to other bariatric surgical techniques. However, there exists the risk of potentially fatal complications. We report the case of an esophageal-pleural fistula that after conservative management was successfully treated with the contribution of endoscopic clipping.
PATIENT AND METHODS: A 27 year old patient with 190kg of weight and BMI 50 underwent LSG. The patient was informed that LSG could be a single procedure if the long term follow-up showed good weight loss, or a first-step surgery to reduce morbid-mortality due to his weight. Gastric resection was completed using 4.8 mm linear stapler on the first two firings and 3.5 mm in the rest. The staple line was not oversewn. The procedure was well tolerated. 36 hours after the procedure the patient underwent a contrast esophagogastric X-ray series. A leak was noted and the patient developed tachycardia. A second intervention was practiced finding only a small amount of fluid but no perforation. Larger drains were installed. On the fourth day, a significant amount of fluid was coming out the drain. On the seventh postoperative day, a large left pleural effusion was noted on chest x-ray. A chest drain was installed and a new contras X-ray series was done. It showed a double leak at the level of the diaphragmatic hiatus, one in the abdominal cavity going to the drain, and the larger one progressing along the right diaphragm, going up on the thoracic wall and coming out through the chest tube. The patient was managed in the Intensive Care Unit with antibiotics, mechanical ventilation and nasoenteral tube feeding for three weeks.
RESULTS: After three weeks the abdominal fistula disappeared but esophageal-pleural fistula remained almost unchanged. A self-expandable stent was considered but due to previous experience the use of endoscopic clip application was the chosen method. Two clips were placed at the fistula and opening in the esophagus, and the defect disappeared on endoscopic view. After four days the chest tube stopped draining saliva and on control X-rays no leaks were seen. Patient made a complete recovery and in outpatient chest X-ray images there were no sequelae. After two years patient weight is 101 kg (90 kg lost) equivalent to approximately 90% EWL.
CONCLUSIONS: LSG, although a safe and low-mortality bariatric procedure, requires expertise and meticulous technique since complications can be catastrophic. Esophageal-pleural fistula is a new complication that should be considered in patients with unexplained pleural effusion. The use of endoscopic clip application played a major role in the closure of the fistula once conservative management failed. LSG has been successful in maintaining adequate weight loss in this patient. 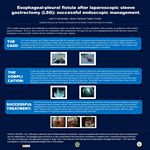