Introduction: While per-oral pyloromyotomy (POP) has shown promise as a novel endoscopic procedure to treat medically refractory gastroparesis, standardized care pathways are not well defined. We aimed to compare the safety and cost of same-day discharge (SDD) after POP with inpatient stay overnight or longer.

Methods: All patients with SDD after POP between January 2016 and May 2018 were retrospectively identified from a prospectively maintained registry. Propensity scores considering gender, age, gastroparesis etiology, and American Society of Anesthesiologists (ASA) class were used to match a comparison group who stayed overnight or longer after POP. Perioperative management, outcomes, and cost were compared between the cohorts.

Results: Fifty-four patients underwent POP with SDD during the study period which were propensity-matched with 54 patients who had POP with inpatient recovery. The SDD cohort was 85.2% female with a mean age of 44.8 years and median ASA class 3. The etiology of gastroparesis was 53.7% idiopathic (n=29), 29.6% diabetic (n=16), and 11.1% post-surgical (n=6). After matching, the comparison inpatient group had no differences in age, gender, etiology of gastroparesis, or ASA class. Operative time was shorter among the SDD cohort (25.4 vs 31.3 minutes, p=0.02). A post-procedure upper gastrointestinal series was obtained in 13.0% (n=7) of patients in the SDD cohort and 83.3% (n=45) of patients with inpatient recovery. Capnoperitoneum was observed in 36.5% of patients who underwent this study, though no leaks or obstruction were noted. While antimicrobial prophylaxis was less commonly administered in the SDD group (50.0% vs 94.4%; p<0.001), no surgical-site infections occurred in either cohort. The mean post-procedure recovery time was 4 hours in patients with SDD. Readmissions within 30 days were less frequent after SDD (7.4% vs 18.5%, p=0.08). One patient in the inpatient cohort underwent negative diagnostic laparoscopy for post-operative abdominal pain. Gastrointestinal hemorrhage occurred in one patient in each cohort, and there were no mortalities. Compared to inpatient recovery, the average total cost for the procedure, recovery, and all subsequent care within 30 days was 26.0% less with SDD (p<0.001).

Conclusions: Following POP, patients can be safely discharged the same day with low risk of both complications and readmission. Total costs in the perioperative period are significantly less with SDD. There was no increased risk of organ-space infection without the use of perioperative antimicrobial prophylaxis. Post-procedure capnoperitoneum is a common radiographic finding but was neither associated with leak nor precluded safe discharge. 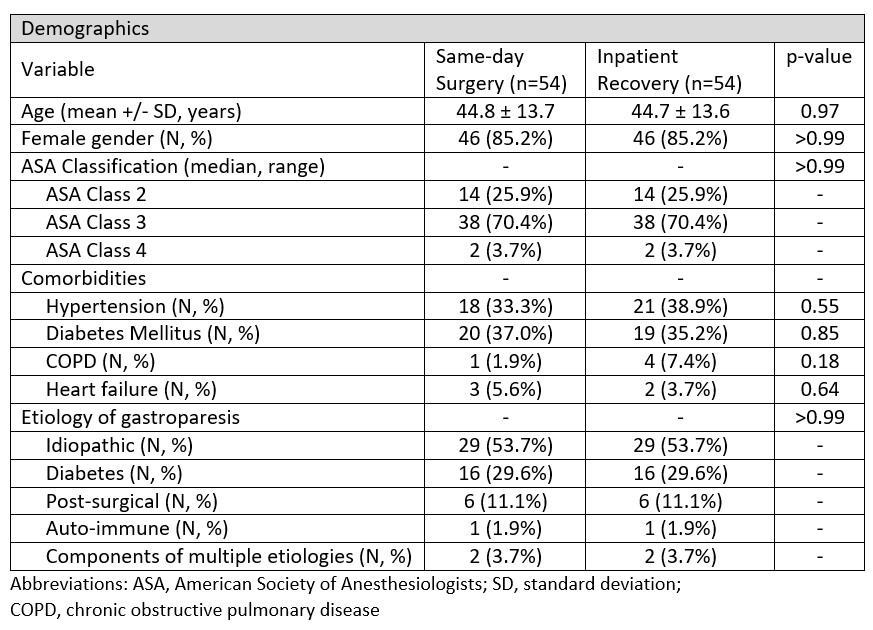 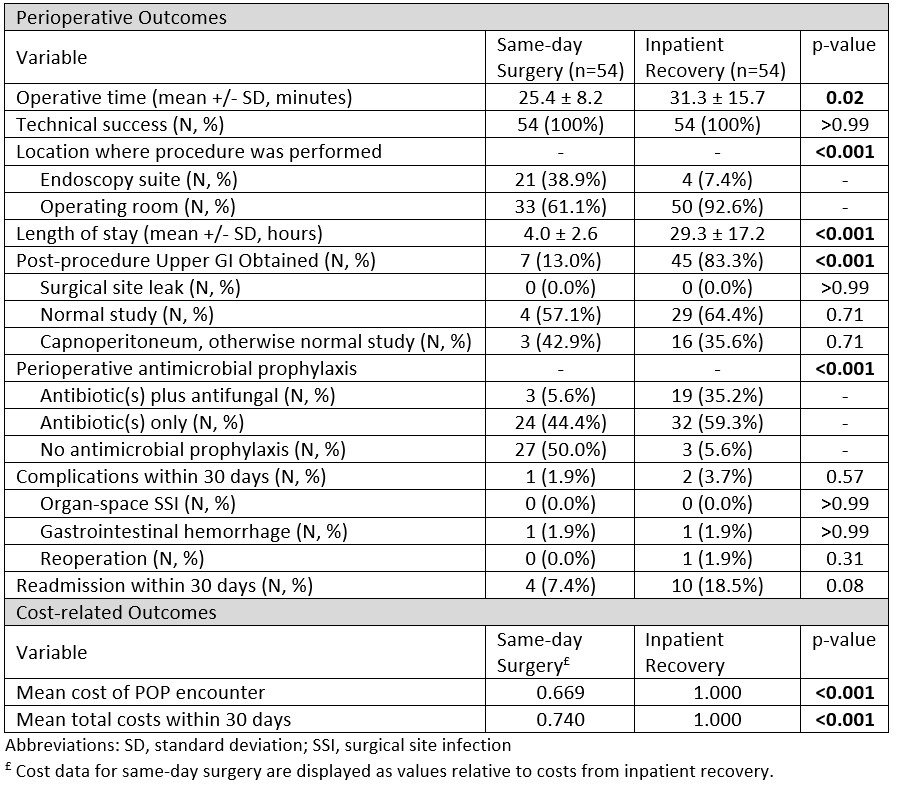