Background: Because of the new understanding and management of peptic ulcer such as the discovery of Helicobacter pylori and the use of high-dose proton pump inhibitors, the role of definitive surgery has changed within the past decades. The existing literature fails to answer the question of which approach offers better long term hemorrhage control with acceptable morbidity and mortality.
Method: The files of all patients subjected to surgery for bleeding duodenal ulcer in Tanta University Hospital during the period from March 2008 to April 2012, were reviewed. Preoperative data, operative technique and postoperative results were reported and analyzed
Results: Thirty seven files were included in the analysis. Files were divided in two groups according to the surgical technique performed; group (A) included 20 patients received transduodenal suture ligation of the bleeder and periduodenal triple ligation of the gastroduodenal, right gastro-epiploic and superior pancreatico-duodenal arteries and group (B) included 17 patients received only transduodenal suture ligation of the bleeder. There was neither rebleeding nor mortality in group (A). In group (B), four patients developed rebleeding postoperatively. Bleeding was haemodynamically insignificant and stopped spontaneously in 1 patient, 1 patient exsanguinated and died before re-surgery and 2 patients had re-surgery; one survived after periduodenal arterial ligation and the other died postoperatively due to complications of gastrectomy.
Conclusion: Adding periduodenal arterial ligation to transduodenal suture control of the bleeder seems to be effective in preventing rebleeding and mortality after emergency surgery for bleeding duodenal ulcer. With the use of intravenous PPIs in the perioperative period, vagotomy is no longer needed. However, the results of this study need to be confirmed in a prospective randomized clinical trial on a larger number of patients. 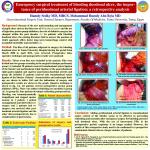