Efficacy of Intracolonic Washout in Patients With Anastomotic Leak

Introduction
One of the most important causes of anastomotic stricture is local sepsis due to leakage. Even though it is defunctioned with stoma formation, sometimes fibrotic stricture remains. We added intracolonic wash out procedure to the conventional procedures for anastomotic leakage in order to reduce the source of sepsis. The aim of this study is to identify the effect of added colonic washout procedure.

Methods and Procedures
A prospective randomized study was conducted in rectal cancer cases with extraperitoneal anastomosis and the subsequent postoperative leakage from January 2004 to December 2010. Exclusion criteria were neo-adjuvant radiotherapy with or without chemotherapy, synchronous formation of defunctioning stoma in cancer surgery and postoperative mortality. The patients were divided into two groups; the control group (CG) underwent conventional procedure; defunctioning stoma and intraperitoneal irrigation. The colonic washout group (WG) underwent intracolonic washout procedure in addition to conventional procedure. Colonic washout procedure in this study was cleansing the colon from the stoma to anus with tepid saline. Patients were evaluated with contrast study, MRI and digital rectal exam to confirm the status of anastomotic area during follow-up period before and after reduction of stoma. The stricture defined in this study means prominent clinical defecation difficulty proved in digital rectal examination, barium enema and MRI. The result of each group was assessed using Fisher’s exact test and Mann-Whitney U-test. P<0.05 was regarded as statistically significant.

Results
A total of 656 patients experienced extraperitoneal anastomosis after rectal cancer resection. Two hundred and sixty four patients underwent neo-adjuvant radiotherapy. Seventy one out of the remaining 392 patients got defunctioning stoma at the time of rectal surgery. Twenty-two patients (6.9%) out of remaining 321 were included in this study. These patients were randomly divided in two groups; Eleven patients per each group. There was no stricture complication in WG, however, three patients(27%) in CG experienced anastomotic stricture after stoma reduction (p=0.214). The patients with anastomotic stricture needed conservative treatment with Hegar dilator to minimize defecation difficulty. Eventually one out of the 3 patient experienced stricturoplasty with general anesthesia. The stoma were reduced in all patient included in this study. The mean time to reduce the stoma was 151days in CG and 114days in WG (p=0.212). 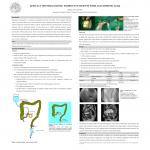