OBJECTIVE: LESS has been increasingly utilized for a variety of surgical procedures. Compared to traditional laparoscopy, LESS skills are more challenging to learn due to the shallow angle between working instruments and the camera. While intracorporeal knot-tying is considered an advanced skill even in traditional laparoscopy, LESS knot-tying is even more challenging due to the almost parallel orientation of the working instruments. The objective of our study was to develop a step by step instructional technique for LESS intracorporeal knot-tying that is easy to learn and practice in a laparoscopic box trainer.

METHODS: The learning platform included a standard laparoscopic box trainer, altered by the authors to include a single midline working port. Through this, a uniport (SILS™ Port , Covidien, Mansfield, MA) was mounted, which accommodated two working instruments simultaneously. Additional equipment included a straight needle driver, an articulated grasper (SILS™ dissector, Covidien, Mansfield, MA), a penrose drain, and a silk suture. After several iterations, a standardized step by step instructional technique for intracorporeal knot-tying was designed. This comprised of nine distinct steps described in an instructional video. Medical students, residents, and fellows were then tested on this platform with respect to time and accuracy in performing an intracorporeal knot, before and after watching the instructional video. The suturing method was further tested in the operating room while performing advanced reconstructive urological procedures.

RESULTS: Fifteen subjects were tested (5 students; 7 residents, years 1-5; and 3 fellows). Up to a 50% reduction in time to completion of the task was noted after watching the instructional video. Consecutive practice on the laparoscopic box trainer with the technique described further improved time to completion and accuracy, with five practice runs being an ideal repetition time to achieve a plateau in skill level for a particular training session. In addition, the skills learned were shown to be successfully translated to the operating room.

CONCLUSIONS: LESS intracorporeal knot-tying is a challenging task to learn due to severely restricted instrument freedom of movement. We have developed an easy to learn, fast technique that minimize collision of instruments by using a straight needle driver and an articulated grasper. We have demonstrated its efficacy in improving suturing skills in a laparoscopic training box designed to simulate a LESS environment, as well as its applicability to the operating room. 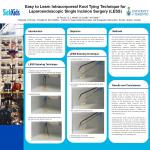