Congenital Absence of the Cystic Duct: A Rare But Dangerous Anomaly

Introduction: Cholecystectomy is the most common digestive tract surgery performed worldwide and injury to the bile ducts is a dreaded complication which leads to both acute and chronic sequelae. The incidence of bile duct injury is increased in the presence of severe inflammation and is compounded by congenital abnormalities of the biliary tract. Congenitally absent cystic duct is one such rare anomaly with severe surgical implications. So far only nine clear cases of congenitally absent cystic duct have been reported. In this report we describe two additional cases of a congenitally absent cystic duct and provide a comprehensive discussion of the clinical significance, and appropriate surgical management of this anomaly.
Materials and methods: A comprehensive English and non-English search for all articles pertinent to an absent cystic duct was conducted. Cases identified were analyzed in regards to age and gender of patients, symptoms at presentation, surgical outcome and intra-operative findings. Patients with recurrent jaundice, recurrent pancreatitis, and intra-operative findings of direct attachment of the GB into the CHD and without gallstone impaction in the GB neck or CBD/CHD were considered to have a congenital absent cystic duct. Patients with dense pericholecystic adhesions and/or gallstone impaction were considered to have acquired absence of cystic duct.
Results: A total of 11 cases, including the two cases presented here, of congenitally absent cystic duct have been reported (Table 1). Although 18 cases of cystic duct anomalies have been reported as congenital absent cystic duct, critical analysis of these cases reveal that 9 of the 18 reported cases had signs of acquired absent cystic duct. The median age among the 11 patients was 49 years, with a M: F ratio of 1:2.3. Seven of nine previously reported patients had recurring symptoms prior to surgery, lasting on average 14.7 years (range 2 to 25 years). A retrograde cholecystectomy approach was utilized in 8 cases (cases 2-5, 7, 9-11) and one patient was treated with cholecystostomy (case 8). Two patients had an antegrade cholecystectomy (cases 1 and 6) and in both cases the common bile duct was mistaken as the cystic duct and was ligated and divided.
Conclusion: Congenital anomalies of the extrahepatic bile ducts are common. Short or aberrant cystic duct entry or union with the CHD is routinely encountered, especially in the presence of severe pericholecystic inflammation. However a congenitally absence of the cystic duct is a rare entity with severe surgical implications. Patients with recurrent episodes of gallstone pancreatitis separated by brief intervals should raise the suspicion of a congenitally absent cystic duct and lead the surgeon to consider open cholecystectomy or at least assess their skills prior to laparoscopic cholecystectomy. Knowledge of this anomaly and its mode of presentation and preferred surgical approach should help avoid inadvertent biliary injuries and the complex biliary procedures which may be required to fix them. 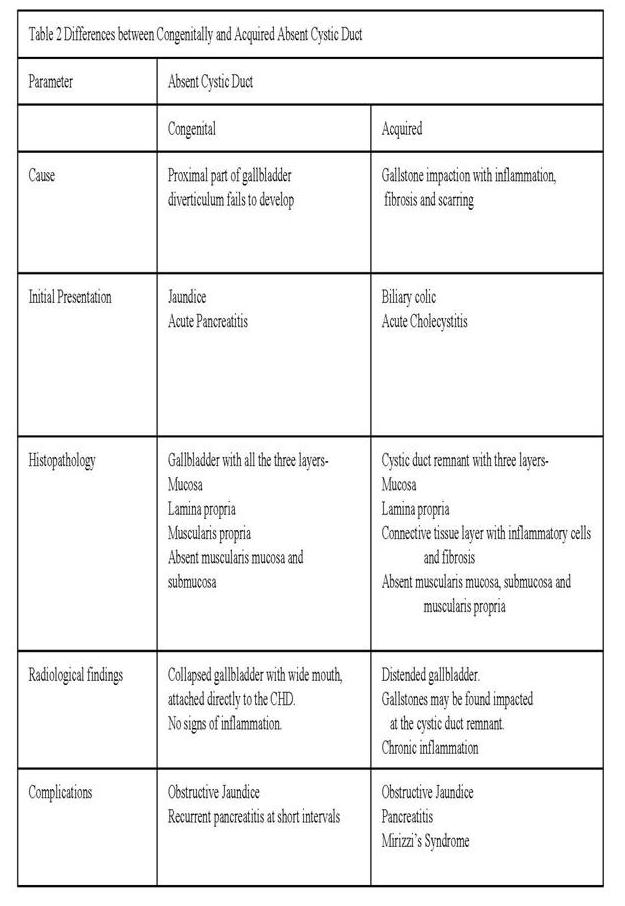 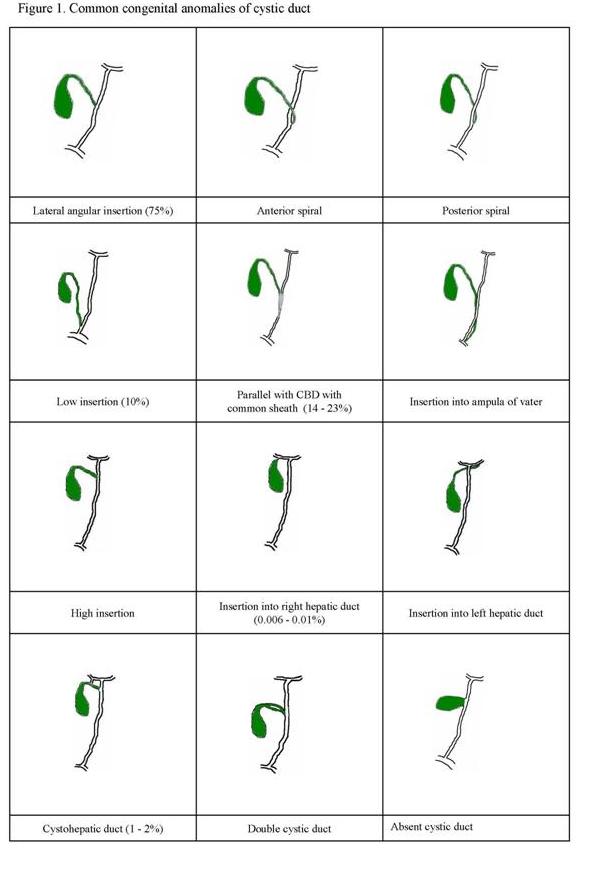