Compliance of the Abdominal Wall During Laparoscopic Insufflation

Introduction: To provide working space between the internal organs and abdominal wall, insufflation with carbon dioxide is a common practice in laparoscopic surgeries. An insufflation pressure of 15mmHg is considered to be safe in patients, but any amount of insufflation has peri-operative and post-operative cardiopulmonary and renal effects. As a composition of viscoelastic materials, the abdominal wall should distend in a predictable manner given the pressure of the pneumoperitoneum underneath during insufflation. The purpose of this study is to elucidate the relationship between degree of abdominal distention and the insufflation pressure, with the goal of determining which patients’ abdomens may distend sufficiently without requiring 15mmHg pneumoperitoneum.

Methods: A prospective, IRB-approved study was conducted to video record the abdomens of patients undergoing insufflation prior to a laparoscopic surgery. Photo samples were taken every 5 seconds, and the strain of the patient’s abdomen in the sagittal plane could be determined, as well as the insufflator pressure (stress) at bedside. Patients were insufflated to 15mmHg. The relationship between the stress and strain was determined in each sample, and a compliance of the patient’s abdominal wall was calculated. In addition, patients enrolled had prior, previously indicated abdominal CTs, which were used to calculate body parameters, such as abdominal fat thickness and rectus muscle thickness. Correlations between abdominal wall compliances and adipose and muscle content were determined. 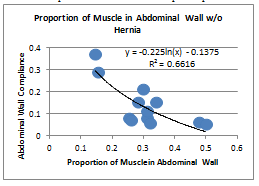